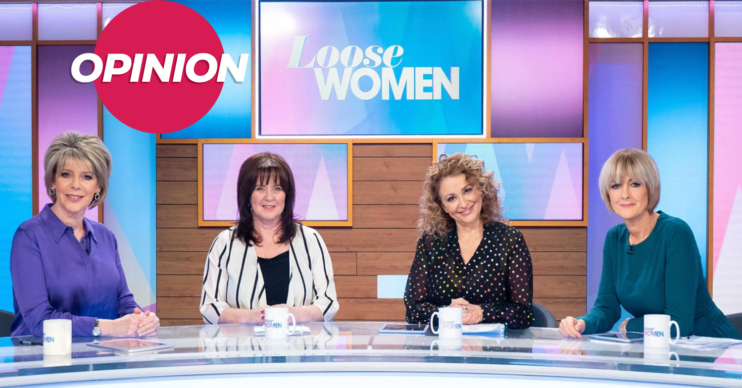 OPINION: ‘It’s time to let Loose Women out to pasture’

Has the show had its day?

TV shows come in and out of fashion and, while it has had a good run, ED!’s Rebecca Carter thinks it’s time for Loose Women to call it a day…

The all-female panel show has been on since the late 90s and has had a range of panellists – some good, some bad.

Don’t get me wrong, the programme has provided some laughs over the years but it just seems like it’s run its course.

I mean the only panellist I truly enjoy watching is Janet Street Porter.

She says it how it is, she’s straight to the point and she stands by what she says.

I don’t think it’s just me who believes the programme’s time is up… some viewers have also voiced the same opinions.

“Can we campaign to get Loose women permanently axed?” one said on Twitter.

“Loose Women should have been axed long ago.”

There have been plenty of times I’ve cringed a bit over the discussions they have. Like when they started talking about their G-spots last.

I mean, who wants to be sat there eating their lunch and listening to that?

Also when they encouraged Joey Essex to strip off to his pants and jump in his pool!

Of course it’s just a bit of fun but can you imagine if the genders were swapped and that was an all-male panel doing that to a woman?

Or when Coleen Nolan repeatedly made raunchy jokes about actor Danny Mac?

At one point, Danny said: “I throw everything at anything I do,” obviously referring to his career.

Coleen then replied: “Really? Anything? Carry on ladies, I’m having a hot flush.”

I get it’s just banter, but it did spark a lot of disapproval on Twitter and I see why.

The show features so many of my favourite celebs such as Stacey Solomon, Denise Welch, Christine Lampard and Coleen Nolan.

But the programme itself just needs to go – or it needs a massive upheaval.

Perhaps if they concentrate on discussing important issues and address tough topics we all struggle to talk about – and leave the pointless drivel out of it!

Do you agree? Is it time for Loose Women to go? Leave us a comment on our Facebook page @EntertainmentDailyFix and let us know.