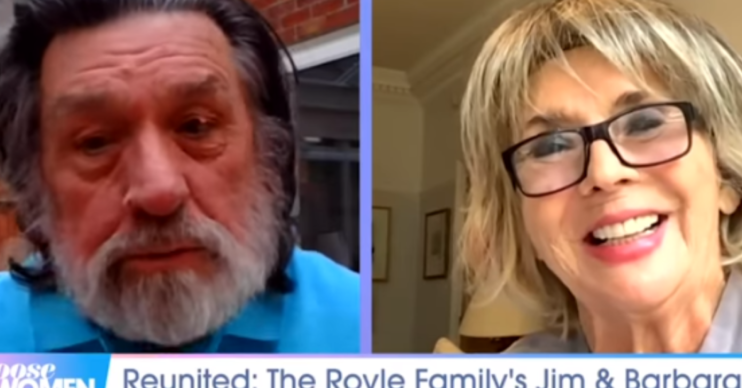 They shared memories of the late Caroline Aherne

Loose Women treated viewers to a dream reunion today when Ricky Tomlinson and Sue Johnston appeared on the show.

Ricky and Sue are best-known for playing Bobby and Sheila Grant in Brookside, and Jim and Barbara Royle in The Royle Family.

They appeared on Loose Women via video link on the fourth anniversary of Royle Family creator Caroline Aherne’s death.

The much-loved pair shared some hilarious stories about Caroline, as well as revealing how Ricky paid touching tribute to her when she died.

And while they ruled out any sort of return for The Royle Family, they did tease a possible reunion for their Brookside characters.

Speaking about Caroline and their experiences working on the BBC sitcom, Ricky shared: “It was absolutely tremendous, there’s a million stories, but you can’t tell them on the air because Caroline was one for playing little pranks, but they were always a little bit rude so we’ve got to be careful what we say. But she was wonderful and she’s so missed.”

Sue added: “For me she was the most generous of women and that showed in her spirit.

“She was very funny, naturally funny, but her generosity was extraordinary. At the end of a week’s filming there would be a table laid out with Champagne, beers, treats for the crew for everyone, she spoilt everyone.”

One hilariously rude incident came when Caroline called Ricky back to set one Saturday morning.

Ricky revealed: “She was cheeky. She was really, really cheeky. She phoned me one Friday night and she said ‘come up to Manchester in the morning, you’ve got to do a voice over, a bit of dubbing’.

“I got there and I went in and her and Craig are sitting there in their seats and they’re watching the screen and they said ‘we want you to do this retake’.”

After revealing it was a scene where he was being carried up the stairs in just his vest and Y-fronts, Ricky said he asked why it needed reshooting.

Sue also shared a moving tribute that Ricky had made for the whole cast after Caroline’s death from lung cancer in 2016.

“Can I show you this because Ricky had these made for us after Caroline died, can you see it?” she asked, showing a painting of Caroline.

“Do you remember Rick? It’s at the bottom of the stairs when I come down every morning.”

“I found it very difficult to watch after Caroline died, but then a few months ago I was flicking through and The Queen of Sheba episode was being re-run and I watched it and I really for the first time was able to enjoy it again and see just how brilliantly written it was.”

Panellist Jane Moore asked whether they would ever reunite for The Royle Family. However, Ricky quickly ruled that out.

“She [Caroline] was wonderful absolutely wonderful – how many people love going to work? how many people can’t wait to get up in the morning and go to work and have a laugh? that’s what it was like every single day.”

But he did tease a possible reunion for his and Sue’s other iconic characters Bobby and Sheila Grant.

“There is rumour that me and Sue could end up in an old age pensioner’s home and a little sitcom built around that, where are they now, in an old person’s home, and I think that would be quite good.”

Sue added: “Yeah, that would be good.”