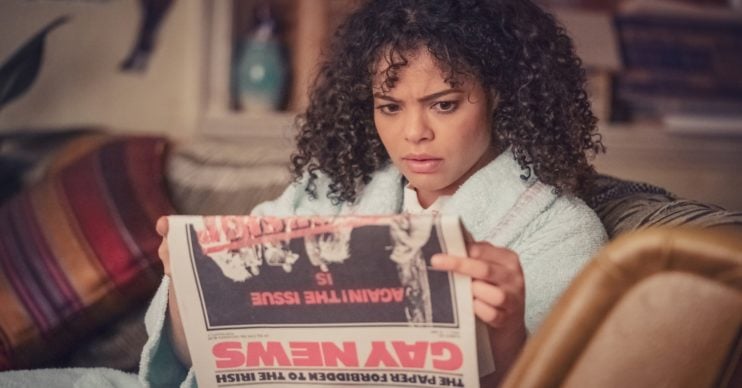 Controversy theories were rife about the virus

The new Russell T Davies drama It’s a Sin revisits the 1980s during the HIV & AIDS crisis, when a ‘new’ virus began to claim more and more lives and crazy myths circulated.

Like Covid-19 now, little was known about the virus and controversy theories were rife.

Remember when some people thought we could catch AIDS from using a public toilet?

Read more: Is Keeley Hawes still married to Matthew Macfadyen and do they have kids together?

AIDS/HIV myths in the 80s

Very much like today’s coronavirus, there were many untrue rumours going around about HIV and AIDS.

With Covid-19, some people are in denial about the severity of the disease.

The 1980s was no different, with fearful members of the public believing the misconceptions spread at the time.

Here are some of the worst myths of that time.

Myth 1: Only gay people get AIDS

Sadly, due to an ignorance about the virus at the time and a general feeling of homophobia, some believed AIDS only affected the homosexual population.

Some headlines even spoke of a “gay plague”.

The fact that the groups most at risk were homosexual men and intravenous drug users meant outright hostility from certain quarters.

An advertising agency, TBWA, was commissioned to make adverts intended to shock the nation into action.

These included the infamous tombstone ad, which clarified that anyone could get the virus – man or woman, and any sexual orientation.

Read more: Symptoms of COVID: Sore and itchy eyes could be sign of virus, expert warns

Myth 2: AIDS can be caught on a toilet seat

Another widespread myth was that AIDS could be caught from sharing a toilet seat.

According to the Terrence Higgins Trust, this is one myth that some people still believe!

HIV doesn’t survive on surfaces, so you can’t get HIV from toilet seats.

Fortunately, it’s extremely unlikely that you’ll catch any virus from sitting on a toilet seat in a public restroom.

Most germs, like the common cold, can’t survive long on the cold, hard surfaces of a toilet seat.

Myth 3: AIDS can be caught from hugging and kissing

HIV cannot be passed on through skin-to-skin contact or saliva – so kissing is allowed!

There is such a small amount of HIV in the saliva of a person living with HIV that the infection can’t be passed on from kissing.

You cannot get HIV from touching someone who has HIV.

HIV can only be transmitted through specific bodily fluids so you cannot get HIV from touching someone, hugging them or shaking their hand.

You cannot get HIV from the sweat, tears, urine or faeces of someone who has HIV.

Myth 4: You can get HIV from used condoms

You cannot get HIV from a used condom.

Outside of the body, HIV in semen can only survive for a very short amount of time.

So, even if a condom had sperm from an HIV-positive person in it, it would not pose any risk.

Myth 5: You can get HIV from sharing a toothbrush

Another one of the HIV myths in the 80s was that sharing a toothbrush with someone who has HIV can pass on the virus.

The truth is that it is not possible because HIV does not survive outside the body.

You also cannot get HIV from coughing or sneezing, sharing food or drink – even if the person preparing your food is living with HIV.

HIV can only be transmitted through specific bodily fluids.

HIV cannot survive in water, so you can’t get HIV from swimming pools, baths, shower areas, washing clothes or from drinking water.

Mosquitos and other insects cannot infect you with HIV – when an insect bites you, it sucks your blood only. It does not inject the blood of the last person it bit.

New or sterilised needles can’t infect someone because they haven’t been in contact with infected blood.

Tattoos and piercings are only a risk if the needle used by the professional has been used in the body of someone living with HIV and not sterilised afterwards.

However, most practitioners are required by law to use new needles for each new client.

HIV infection occurs when infected bodily fluids get into your bloodstream in these ways – unprotected sex (including sex toys), from mother to child during pregnancy, childbirth or breastfeeding, injecting drugs with a needle that has infected blood in it and infected blood donations or organ transplants.

What is It’s a Sin about?

The drama follows a group of young gay men in the 1980s during the Aids crisis.

First of all, we meet 18-year-old Ritchie who is leaving the Isle of Wight to go to university.

In London, Roscoe walks out of parents’ home, while Colin arrives from Wales to start a new career on Savile Row.

The three men meet, and along with fellow student Ash and best friend Jill, form a gang and move into a flat, christened the Pink Palace.

However, a distant threat on the horizon means that life in the 80s might be all too precious.

Channel 4 It's a Sin Keeley Hawes