Ian had to first bury his head in a pie which contained slime and cockroaches, but it appeared to get too much for him and he couldn't stop belching. 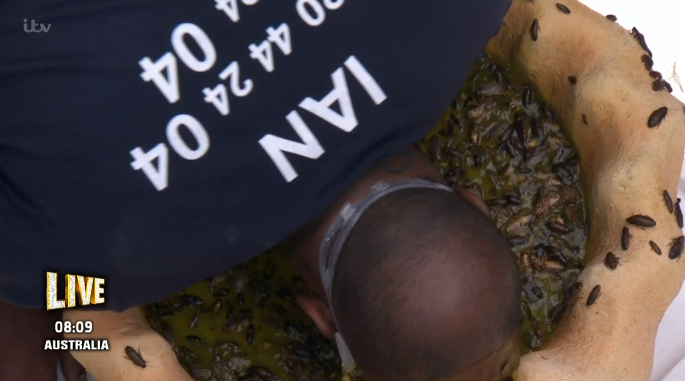 Ian had to search for the star in the cockroach-filled liquid (Credit: ITV)

Many viewers couldn't take it, with one even asking producers to take Ian's mic off.

One person said on Twitter: "Can someone please turn off Ian’s mic because I can’t deal with the constant burping."

I can just hear Ian burping in the background.

Another wrote: "Who keeps burping on the live trial on #imacelebrity? It’s disgusting!"

A third added: "The worst part of this trial is Ian repeatedly burping, its making me feel sick."

Who keeps burping on the live trial on #imacelebrity ? It’s disgusting! #ImACelebrity2019 #ImACeleb

The worst part of this trial is Ian repeatedly burping, its making me feel sick 🤮 #ImACeleb

Is it necessary for ian to keep burping like that 🤢#ImACeleb

I can just hear Ian burping in the background😂😂#ImACeleb

Hearing everyone burping and gipping is hilarious #ImACeleb

Read more: I'm A Celebrity's Dec demands to 'take over' from Ant after he fluffs his lines

Later in the trial, Ian had to drink blended pig's penises to win a meal for camp.

But after getting the drink down, he was left gagging and burping leaving viewers in hysterics.