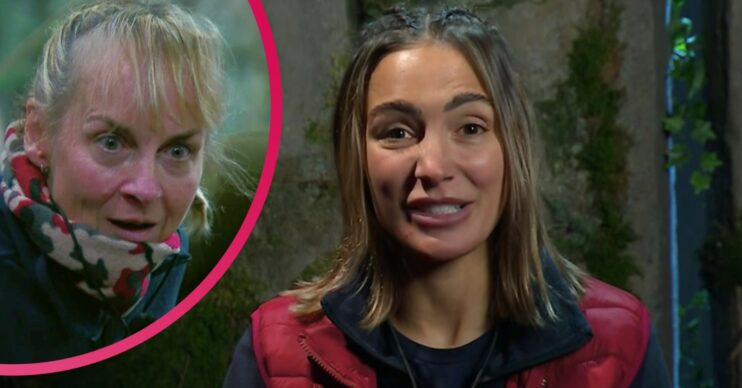 Louise chose Snoochie to be her deputy in camp

I’m A Celebrity viewers were convinced Frankie Bridge was “annoyed” after Louise Minchin failed to pick her as deputy.

During tonight’s show (December 7), the campmates voted the former BBC Breakfast host to be camp leader.

And it didn’t take long for fans to notice Frankie‘s reaction to the news.

She said: “Oh my gosh, I did not expect that. What an amazing thing they think I should be their leader.

“I’m really touched, I’m really proud and I’m also really nervous. I want to do it properly and make sure everybody’s happy.”

Read more: I’m A Celebrity in ‘bullying’ row as David ‘picks on’ Naughty Boy over Snoochie and Kadeena

Louise picked Snoochie Shy as her deputy, saying she wanted someone who would keep them “really upbeat”.

“I feel like it is my responsibility to make sure we are entertained every single day.”

The pair went on to distribute the chores, with Frankie and David Ginola being in charge of camp maintenance.

However, some viewers believed that Frankie looked unhappy as Louise made her deputy decision.

Shortly after she announced Snoochie as her deputy, the camera cut to Frankie who gave a look.

How did I’m A Celebrity viewers react?

A third wrote: “Oops, Frankie struggling to hide her feelings with the [bleeping] smile.”

Feel like Frankie is raging she wasn't made deputy #ImACeleb

Why didn't louise pick Frankie? That was a slap in the face for Frankie since their so close.#ImACeleb pic.twitter.com/hB4HbKHRB0

In addition, a fourth posted: “Why didn’t Louise pick Frankie? That was a slap in the face for Frankie since they’re so close #ImACeleb.”

Furthermore, a sixth shared: “I think Frankie is a bit annoyed that she isn’t deputy #ImACeleb.”