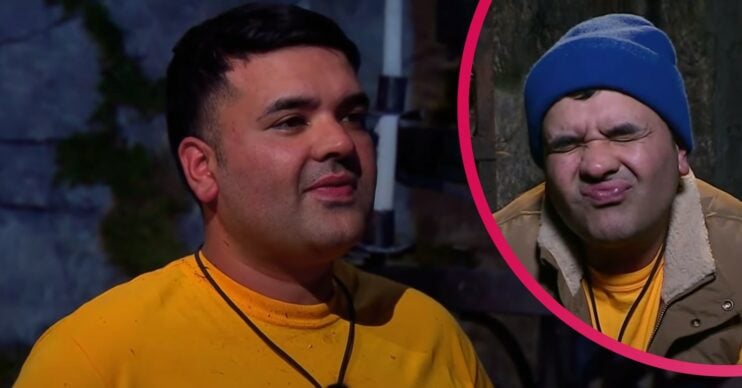 Trolls have taunted him by comparing Naughty Boy to Gemma Collins

The family of I’m A Celebrity contestant Naughty Boy have rallied around him after he threatened to quit the show.

The music producer, 36, has found living in The Clink on the ITV series tough going.

But despite indicating they feel he has been “struggling”, a family member still believes Naughty Boy will “be fine”.

And they also stressed how many viewers will not know what Naughty Boy goes through on a day to day basis as they defended him on social media.

What have the family of Naughty Boy said about his quit threat?

Naughty Boy – whose real name is Shahid Khan – has indicated he feels “traumatised” by his experience in The Clink.

He received support from his fellow contestants during Tueday (November 24) night’s episode after viewers saw him speaking about leaving.

“I had a feeling earlier, and I was thinking about mum, and obviously I love you guys.

Read more: I’m A Celebrity: Juicy jungle romances and what happened when the cameras stopped rolling

“I don’t think after knowing what the Main Camp probably knew what they were putting me through knowing I did the challenge earlier – I don’t know if I could ever join that camp.”

David Ginola put his arm around Naughty Boy and Richard Madeley tried to see whether anything might persuade the DJ to stay on.

But while viewers expressed a wide range of reactions to Naughty Boy on social media, the person looking after his Twitter account during the series hit out at criticism.

‘He is just overwhelmed’

As well as retweeting someone else’s claims about the stigma of men’s mental health, the family member indicated they endorsed the points made.

The post they initially re-shared read: “In a world where so many say to ‘be kind’ and so much focus on mental health and changing the stigma around men and depression/anxiety, the reaction and comments towards Naughty Boy are disappointing to say the least. #ImACeleb.”

The family member then wrote: “This! If only everyone knew what [Naughty Boy is] battling on the outside world.

This is the first time he has left her to do something life-changing!

“His mum (my nan) is battling dementia and he has been taking care of her for the last five years. This is the first time he has left her to do something life-changing! He is just overwhelmed and he will be fine.”

They continued in a later tweet: “Also, I’m sure a lot of us have had breaking points. The only difference is they weren’t on national TV.

“The Naughty Boy you saw within the first two days is the real him. He is obviously mentally struggling and we have faith that he will be okay!”

What is the situation with Naughty Boy’s mum?

Naughty Boy, who has worked with the Who’s Who of the music industry, admitted he would miss his mum terribly before the series began.

He said: “I live with her and it’s going to be hard being away from her.”

Naughty Boy, who is ambassador for Dementia UK, has also previously reflected on how his mother’s condition has affected him.

He said: “As a family, [dementia] can seem like a lonely experience.

“You don’t think anyone will understand. It does affect your mental health.”