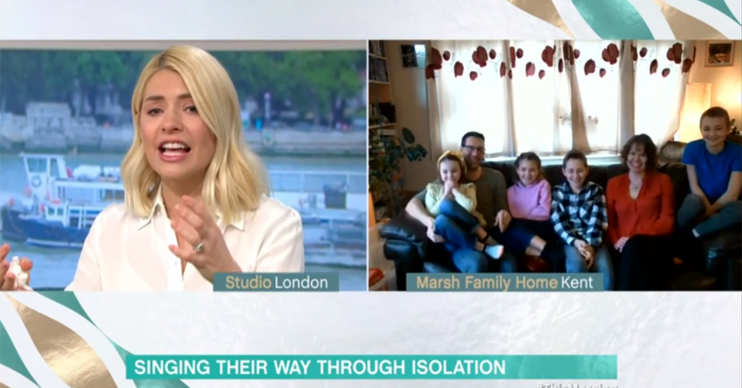 The family created a rendition of Les Misérables' One Day More

TV’s Holly Willoughby became emotional on This Morning over a family’s self-isolation song amid the coronavirus pandemic.

A family-of-six created a lockdown-themed rendition of Les Misérables’ One Day More and it’s gone viral.

The song contained lyrics such as “every man will need vaccines” and “make some respirators now”.

It also contained funny lyrics such as “have you seen my brother’s hair” and “do I change my underwear”.

The song concluded: “We will join the people’s heroes. We will phone those left alone. Our grandparents are miles away.

I think it’s just that family coming together and doing that. It’s just so nice.

After the song was played, Holly became teary as she said: “Bravo! Bravo! I love that. It makes me really emotional.”

Her co-star Phillip Schofield said: “You cried!” to which Holly said: “I know and it’s really funny so I don’t know why.

“I think it’s just that family coming together and doing that. It’s just so nice.”

As the family appeared on the programme via video call, Phil joked: “Look what you did to Holly!”

Holly said: “There are so many families out there trying to think of things to do and there’s something magical that happens when a family does that and comes together.”

What did the family say?

Dad Dr Ben Marsh, a history lecturer at the University of Kent, revealed the family don’t have any musical theatre background but all play instruments.

Read more: Holly Willoughby ‘salutes the NHS’ as she presents Monday’s This Morning in a blue blouse

She added: “It is completely surreal, it has been the craziest 40 hours.

“We recorded it after tea on Sunday and we thought we’d put it up and tag a few friends so they can have a bit of a laugh.

“A few people then asked if they could share it and it just snowballed.”

This Morning airs on ITV, every week day, at 10am.

What did you think of the family’s song? Leave us a comment on our Facebook page @EntertainmentDailyFix and let us know.