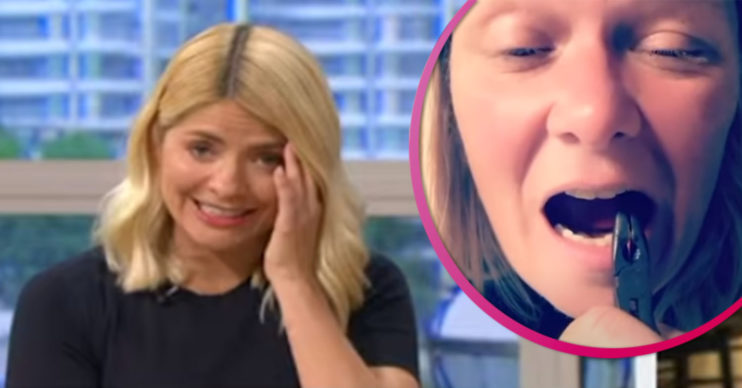 TV duo Holly Willoughby and Phillip Schofield were shocked when a This Morning guest revealed she tried to pull her own tooth out.

Fay Rayward attempted to pull her own tooth out using a pair of pliers after being denied an emergency appointment.

She appeared on Thursday’s show and explained how she tried to relieve her pain.

Read more: Phillip Schofield ticks off This Morning producer for eating biscuits ‘in his ear’

Fay explained that she was left in pain after a filling fell out and her tooth began to crack.

She was prescribed antibiotics however the pain became increasingly worse.

Due to the coronavirus pandemic and lockdown, Fay wasn’t able to get a dental appointment because it wasn’t an emergency or a “serious case”.

However, after six days of pain, Fay decided to try and fix it herself and grabbed a pair of pliers.

She said: “I was trying to bear with it. I knew what the situation would be with dentists during lockdown.”

Speaking about taking matters into her own hands, Fay continued: “It was desperate measures. I was crying and didn’t know what to do.

“I started with tweezers tying to loosen the tooth and got my husband’s pliers and tried to remove it myself.”

Holly squirmed as a clip of Fay trying to fix her tooth played.

Fay eventually had her tooth extracted by a dentist.

Viewers were also left cringing at the segment, with one person admitting it made them feel “faint”.

They wrote: “I feel faint thinking about someone trying to rag their own tooth out.”

Another tweeted: “This whole dentist thing and the woman attempting to pull her own tooth out is making me cringe.

“Especially because my own filling came out the other day.”

A third said: “Absolutely CRINGING at this woman talking about her tooth story. My stomach is turning.”

Absolutely CRINGING at this woman talking about her tooth story. My stomach is turning 🤮🤮🤮🤮🤮 #ThisMorning