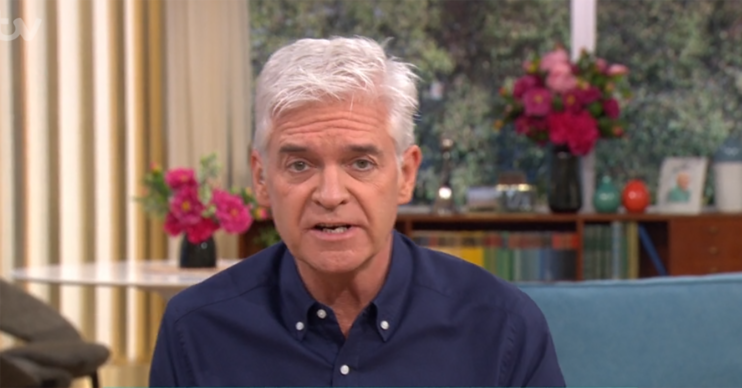 The presenter could hear 'munching' in his ear piece

TV’s Phillip Schofield jokingly told off a producer live on air when their biscuit munching became too distracting.

The This Morning presenter could hear someone eating through his ear piece and couldn’t concentrate on hosting the show with Holly Willoughby without mentioning something.

“Who is eating what upstairs?” Phil asked.

Holly then confirmed: “Someone is munching in our ears.”

Phil continued:”Who is eating what? What is it?… It’s a biscuit?!”

As the producer confirmed they were eating biscuits Holly dissolved into giggles.

Phil went on to explain to viewers what it’s like when you can hear someone eating through the ear piece.

He said: “I want you to imagine someone sitting right next to you in the cinema, opening a bag of something, right next door to your ear.”

Read more: Janet Street Porter tells Boris Johnson to ‘get stuffed’ after he advises Brits to get fit in lockdown

It wasn’t just the munching noise that annoying Phil – he pointed out that him and Holly aren’t even allowed to get a biscuit for themselves due to social distancing.

“We can’t get offered anything? We can’t eat them. Nothing,” he said, laughing before adding sarcastically: “Well I hope you enjoy!”

At the weekend, Phil slammed speculation he has a boyfriend after posting a picture of him out for a social distanced walk with a friend.

Phil snapped a selfie out for a countryside stroll with a mate but rather than comment on the rolling hills and countryside, some followers were more fixated on his pal.

Read more: This Morning quiz: Can you guess which star said these quotes?

Phil had told his followers: “First socially distanced walk with a mate!

“Thank you @sischofe … last person I had a drink with before the wheels fell off, first I’ve seen as we try to reattach them!”