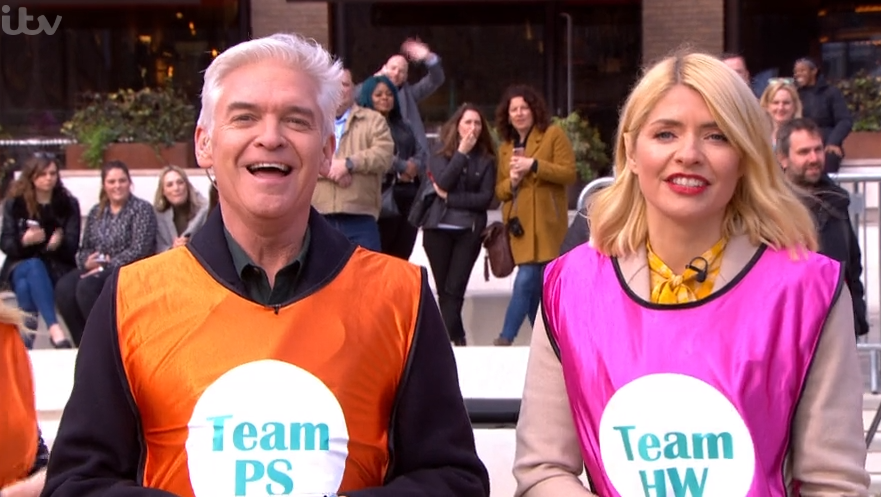 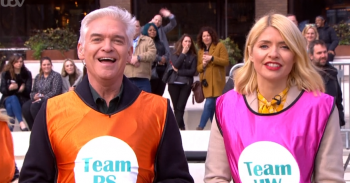 Holly Willoughby made a playful dig at her This Morning co-star Alice Beer during a pancake race.

To celebrate Pancake Day on Tuesday’s show, hosts Holly and Phillip Schofield joined some of their co-stars, including Alice, Dr Chris, Vanessa Feltz, Sharon Marshall and Trinny Woodall, to take part in a race.

The stars had to run around an obstacle course while trying to flip their pancakes.

Consumer expert Alice was pretty quick during the race and her talents stunned Holly.

Alice took the joke in good humour and replied: “You always knew I was a tosser didn’t you?”

One viewer was stunned by Holly’s remark and wrote on Twitter: “Holly to Alice Beer: ‘Finally we’ve found something you’re good at.’ Shade!”

Meanwhile, during the segment, Phil accidentally let slip a naughty word after his pancake leaped out of his frying pan.

As his pancake dropped out of the pan, Phil shouted: “Oh [bleep]!”

If you missed it, Phil said the s-word which rhymes with “hit”, but he added the letter ‘e’ on the end.

Arriving back at the finish line, Phil told his team mates Vanessa Feltz and Trinny Woodall: “I dropped it.”

Admitting his naughty slip of the tongue, Phil added: “I did swear half way round, I am sorry. I semi-swore. I put an ‘E’ on the end. I dropped it.”

Viewers were in hysterics over Phil’s swearing and shared their thoughts on Twitter.

One person said: “@Schofe and @hollywills tossing pancakes on @thismorning was the funniest thing I’ve seen in ages!!! Phil’s response to dropping his pancake ‘Oh [bleep]!”

Another said: “Phil saying [bleep] live just made my day,” while a third added: “Think Phil forgot his mic is still on. ‘Oh [bleep].'”

Meanwhile on the show, Holly divided viewers with her outfit choice.

The star wore a £295 bright yellow bow print silk tea dress from L.K.Bennett with a pair of nude heels from Gianvito Rossi.

However, one person commented: “No, too old-fashioned,” while another wrote: “Don’t like this dress makes you look frumpy!”

Others loved the look as one person said: “Beautiful as always! It disappoints me to see that some women feel as though it is their right to vocally scrutinise someone else’s physical appearance. If your opinion isn’t positive, please keep it to yourself.”