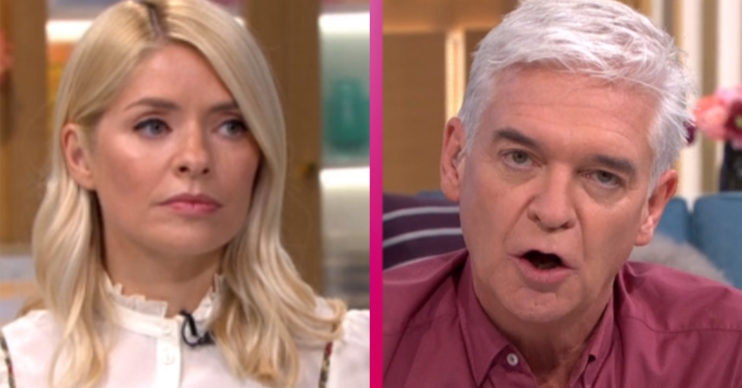 Holly Willoughby and Phillip Schofield were shocked as a This Morning guest warned hugs could be banned until next year.

Prof Carl revealed that hugs will likely be off limits until into next year due to the coronavirus pandemic.

Read more: Ant and Dec explain why they’re able to hug each other amid coronavirus pandemic

Phil asked: “How long do you think before we can actually hug each other?”

Prof Carl replied: “If I was a betting man I would be thinking May next year, putting in plans for summer holidays, thinking about shaking hands and hugging each other.”

Holly and Phil pulled a sad face at the prediction.

He added: “But I want you to remember – if we stay vigilant – there are more diseases than just Covid out there.

“There is influenza, RSV.”

“If we take forward some of this social distancing, we will flatten out some of the mortality we see over winter.”

Following the interview, Holly asked Phil: “Why did you ask that? Don’t ask that question again.”

Holly and Phil haven’t been able to hug each other in six months because of social distancing.

If I was a betting man I would be thinking May next year.

However, on today’s This Morning, they were able to cuddle each other using a ‘cuddle curtain’.

What did Holly and Phil do on This Morning?

A ‘cuddle curtain’ is made of thick plastic which means two people can put their arms through and hug each other without actually having contact.

Phil said: “We had a chat with the team and they managed to create this,” as crew members brought in a ‘cuddle curtain’.

Holly said: “Shall we give it a go? How long has it been since we’ve done this?”

Read more: This Morning guest erupts in furious rant as he defends Adele against recent backlash

The pair then put their arms through and hugged each other as Holly said: “Oh my God. I don’t want to let go!”

Have you used a ‘cuddle curtain’? Leave us a comment on our Facebook page @EntertainmentDailyFix and let us know.