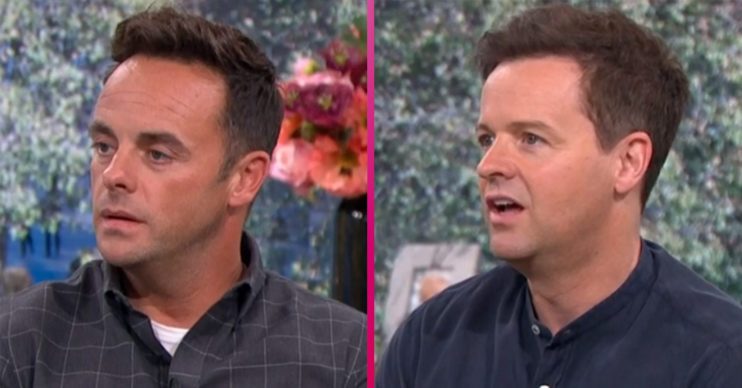 Ant McPartlin and Dec Donnelly explained why they don’t have to social distance on This Morning today.

The duo appeared on Tuesday’s show (September 1) as hosts Holly Willoughby and Phillip Schofield returned after their summer break.

Unlike Holly and Phil, Ant and Dec were able to sit next to each other and even share a hug.

Read more: This Morning viewers teary as Holly and Phil finally share a hug on the show

Why don’t Ant and Dec have to socially distance?

The pair explained they are currently in a Covid cohort filming Britain’s Got Talent and other things.

Explaining why they didn’t have to socially distance, Ant said: “We’re working on BGT at the moment and other things so we get tested every four days.”

Dec said: “So basically our households are connected and we form a cohort.”

Ant added: “We’ve got to be careful about where we go and who we see but we’ve got each other.”

Meanwhile, Ant and Dec opened up about celebrating 30 years in showbiz.

We’ve got to be careful about where we go and who we see but we’ve got each other.

The Geordie duo are releasing a book, Once Upon a Tyne, to celebrate the milestone.

Phillip asked the pair if it feels like they’ve spent 30 years working in showbiz.

Wondering why Ant & Dec can sit together on the #ThisMorning sofa?

They've been telling us all about their 'cohort'.

Dec said: “Not at all and it feels like it’s gone in a blink of an eye and bizarrely – bad news for you – it feels like we’re only just getting started.”

Ant added: “Because we love it, that’s the thing.

Dec said: “And correct me if I’m wrong, but I don’t think you ever get to a point where you go, ‘Ah, I’ve made it.’ You never do, nobody ever does.”

Meanwhile, the pair opened up about their new book.

Read more: Holly Willoughby returns to work on This Morning in £800 autumnal outfit

Ant said: “We wanted it to be like a conversation so that you can hear both of us talking through each story.

“Every chapter is every show that we work on… it’s all of the backstage stories or daft stuff that has happened to us throughout the years.”

This Morning airs weekdays from 10am on ITV

Will you be buying Ant and Dec’s book? Leave us a comment on our Facebook page @EntertainmentDailyFix and let us know.