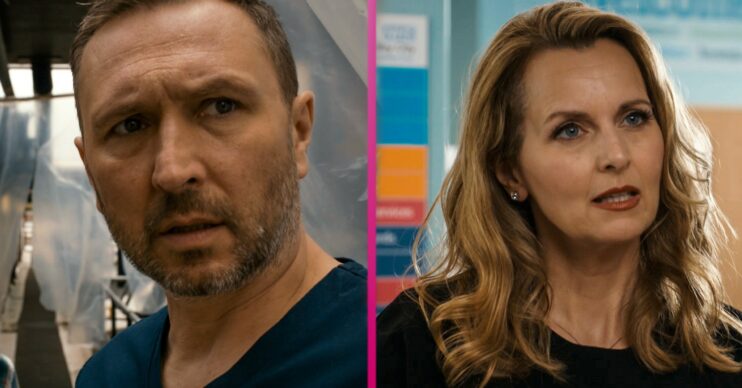 Holby City spoilers for tonight reveal Fletch confronts Jeni about what she did to Evie.

Meanwhile Eli is thrown when his wife turns up and Lucky’s condition is worse than originally thought.

Evie and Mia have given their statements to the police, but Donna and Fletch are not sure on what’s happening with Jeni.

Fletch is struggling to focus on work but is assured by a supportive Donna that Jeni will almost certainly be in a police cell by now and can’t hurt anyone else.

However they’re shocked when Jeni turns up to work.

After Sacha gives away Mia’s whereabouts, Donna and Fletch fear the worst is yet to come.

However it’s not long before Jeni starts to realise that the police are after her.

Despite Jeni’s attempts to flee, some quick thinking from Evie allows Fletch to catch up with her and it’s not long before they have the ultimate showdown.

Fletch soon confronts Jeni about what she did to Evie, but she pleads with him not to give up on their relationship.

Struggling to control his emotions Fletch contemplates taking shocking action, but can Evie talk him out of it?

Eli is thrown when his wife Amelia turns up at the hospital and things grow tense when he finds out the reason for her visit.

It turns out it’s the day of their latest IVF treatment. However when she springs an awkward surprise on Eli, he struggles to rise to the challenge.

It’s not long before the cracks are show in his marriage.

However things take a terrifying turn when Amelia collapses, Eli makes his priority to look after her irritating Jac.

Once alone, Amelia implores Eli to put their relationship first and questions why he is still at the hospital when the stent trial is no longer happening.

Josh and Eli for a friendship

Josh is desperate to keep on top of his responsibilities at work, as well as being the perfect partner to Ange and father to their newborn twins.

However his day takes a turn when his mum Elaine turns up.

Realising what Josh is juggling, Elaine addresses her concern that he might be falling into his old habits.

Soon Josh and Eli for a bond when their individual personal problems collide.

As Eli struggles to cope with the train the IVF is having on his marriage, he finds an unlikely ally in Josh, who is feeling the pressure of his own responsibilities with two new babies.

After a heart to heart the pair agree to start jogging together as an escape from their lives, but could this be the start of a new friendship?

The truth about Lucky’s attack revealed?

Meanwhile Lucky is still in a coma after being attacked by Jeni.

However the team hope they can start to ease the sedation.

Sadly, tragedy strikes before they get a chance and Max is devastated when she finds out Lucky’s condition is now more serious than they thought.

But as the truth about Jeni’s behaviour spreads around the hospital, could it be too late for Lucky?

Holby City continues Tuesday (September 28) at 7.50pm on BBC One.