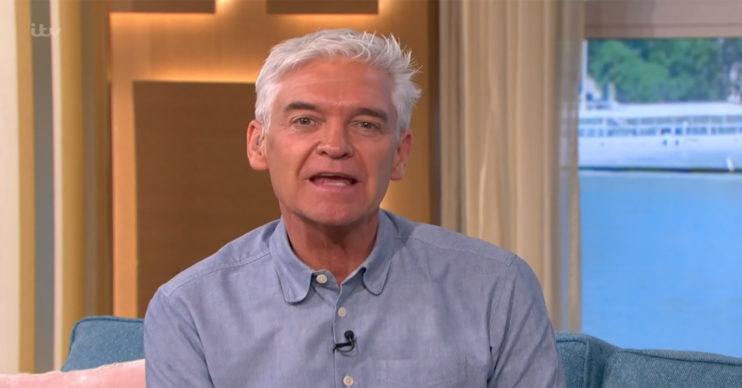 He's off for the summer from Friday!

TV’s Phillip Schofield joked This Morning bosses couldn’t sack him as he flouted the Spin To Win rules once again.

The presenter wasn’t satisfied with the contents of the Spin To Win bag.

Phil and co-star Holly Willoughby spoke to viewer Mary, who had a chance to win some cash after saying the correct pass phrase.

Read more: This Morning viewers gobsmacked by woman who has injected filler into her face

Phil then spun the wheel and it landed on £500.

Mary exclaimed: “Oh thank you! Oh my goodness, that’s the best news ever.”

We’re off for the summer on Friday so they can’t sack me.

The ‘bag of shizzle’ was then lowered but Phil wasn’t happy with what was inside.

“I can’t see anything else in here other than a box of rock salt.”

Holly Willoughby said: “Listen, that means you can make Phil Vickery’s focaccia with that.”

Holly said: “We’ve just boosted you to a thousand pounds!”

Phil told Mary: “We’re off for the summer on Friday so they can’t sack me.”

Mary said: “Thank you so much and you guys have a fine day.”

Meanwhile, earlier in the programme, a couple who were getting married had a chance to win some money in the Spin To Win segment.

Kerry and Steve were preparing to tie the knot later in the day and had a few surprises from the daytime show.

First Alison Hammond turned up at their door with a bottle of champagne and flowers.

The couple were then offered the chance to win some money for their mini-moon.

Congratulations Kerry and Steve – enjoy your special mini-moon and have a wonderful wedding day! 👰💍💐

He said: “That’s amazing! I’ve never seen it do that before.”

Have you ever entered This Morning’s Spin To Win? Go to our Facebook page @EntertainmentDailyfix and leave a comment to let us know.