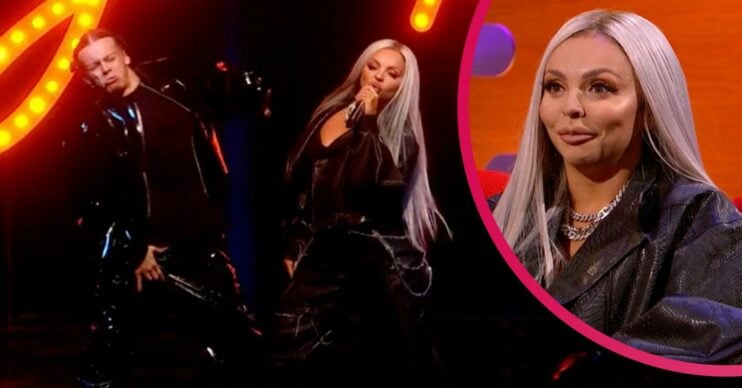 Host also picked her up on bad language

Viewers of The Graham Norton Show were not impressed by Jesy Nelson on the programme last night (Friday October 29).

The former Little Mix singer put in her first solo performance of debut single Boyz on the chat show.

Host Graham Norton poked fun at Jesy for her bad language after she had done her routine. He also teased her by suggesting she can’t control her bowel movements after the 30-year-old mentioned her nerves over performing.

As Jesy joined the other guests – Dame Judi Dench, Jamie Dornan, Salma Hayek and Tinie Tempah – Graham asked how she felt her performance had gone.

He said to her: “How did that feel? Your cherry is gone now. First solo performance, done!”

Jesy replied: “I’m not going to lie, that’s the most I ever [blank] myself. That was scary.”

Picking up on her expression, Graham said as an aside in mock disapproval: “Dame Judi Dench, right there.”

Moments later, Jesy swore again when she mentioned how awed she was at meeting collaborator P Diddy.

Graham called back to Jesy’s earlier comment about nerves, joking: “Ah, you [blank] yourself, we understand.”

He also repeated his aside about Judi Dench being within earshot of Jesy’s use of profanity.

Graham also returned to the same gag for a third time when Jesy explained she wasn’t rushing the writing of her album.

Jesy was also asked about how she is currently getting on with her ex bandmates.

She admitted there wasn’t much communication between them at present. But she added she ‘wishes them all the best’.

“But there is no bad blood from my side and I still love them to pieces.

“I just wish them all the best, genuinely.”

Although many viewers noted on social media how they weren’t impressed about Jesy swearing in front of Dame Judi, there seemed to be many more criticising her performance. There were several accusations that Jesy may not having been singing live.

One Twitter user wrote: “Oh dear, Jesy Nelson decides it is a good idea to mime on #GrahamNorton show for her first public performance? If you can’t or won’t sing live then don’t come on the show.”

Another viewer posted: “Don’t usually watch The Graham Norton Show, but flicked on to see Obama, Springsteen and Judi Dench. Thought ‘amazing guests, maybe Bruce will sing the show out (remotely)’. Instead we get Jesy Nelson, who can sing but chose to mime instead, in a truly vapid performance.”

The miming by Jesy Nelson was awful.

“Watching Jesy Nelson attempt to mime on the @TheGNShow is like watching a very, very, very badly dubbed film,” wrote a third person.

However, other people defended Jesy over the criticism.

One said: “Everyone needs to chill out with the criticising Jesy Nelson performance on #GrahamNorton.”

Another added: “Wow so much hate for Jesy, I’m guessing from Little Mix fans. I’m no fan of either but it’s so sad in the current climate.”

One wrote: “I thought Jesy Nelson’s performance was pretty awesome and surely Dame Judi Dench has heard swearing before, stop being such bullies.”