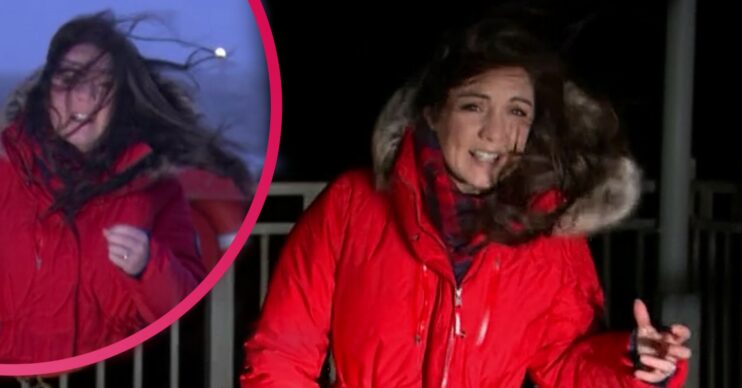 Get in the warm, Laura!

And viewers soon slammed the show for making her stand in the pouring rain and howling wind, as they expressed concern for her.

Where was Laura on GMB this morning?

Storm Barra is producing driving rain and gale-force winds across the country.

Yesterday it hit Northern Ireland, and today it is battering the west coast of Wales and parts of England.

In fact, the Met Office still has in place a yellow weather warning for wind in some areas.

However, this didn’t stop Laura going out to present the weather reports this morning on today’s show.

Appearing in Weston-Super-Mare, she braved winds of over 55mph and she presented the weather on the sea front.

@GMB why does @Lauratobin1 have to be outside in this weather? Poor Laura doesn’t need to be outside for us to know how bad the storm is. We can see it from our windows. It’s dangerous.

How did viewers react to Laura?

It wasn’t long before viewers wrapped ITV on the knuckled for putting Laura out in such adverse conditions.

One wrote: “@GMB why does @Lauratobin1 have to be outside in this weather?

“Poor Laura doesn’t need to be outside for us to know how bad the storm is.

“We can see it from our windows. It’s dangerous.”

Another replied to an ITV tweet: “Do you think we are so stupid that we have to see Laura being blown away to believe there’s a storm, grow up, have her in the studio.”

Hopefully she gets plenty of tea!

“Couldn’t hear a word you were saying but you’ve gone above & beyond this morning!! I hope you have plenty of tea/coffee!”

Finally, another wrote: “That’s naughty of ITV to send Laura out on a day like this, bring her into the studio, in the warm.”