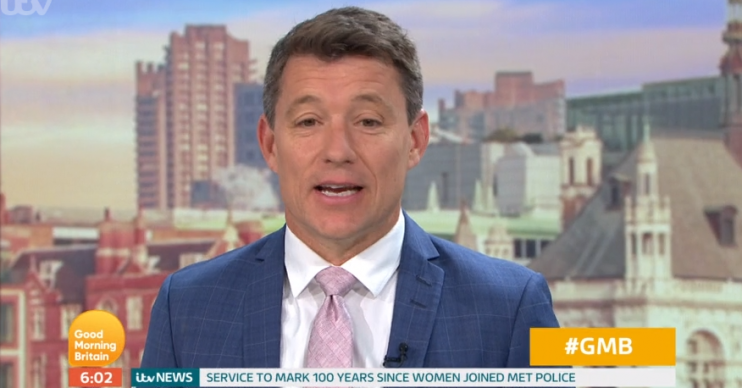 He quickly corrected his slip-up

The presenter, 44, and co-star Kate Garraway were passing over the news to correspondent Nick Dixon during Friday’s show.

Ben and Kate managed to keep a straight face and carried on with the segment.

However, Ben’s slip-up didn’t go unnoticed by viewers, who were left in fits of laughter.

One person wrote on Twitter: “Thanks Ben for the ‘Morning Dicks’ put a smile on my 12 yr olds face just as he left for school. (Sic)”

During yesterday’s show, Ben managed to bag a kiss from Kate but their co-star Susanna Reid refused to pucker up.

The hosts were testing out a new kiss cam, which will appear on Eurovision, and it seems Kate was rather eager to try it out.

As the camera panned to the trio, Kate leaned in to kiss Ben on the cheek while Susanna kept her distance and scrunched up her face.

Kate said: “We all went a little shy then,” to which Ben joked: “It’s so unlike you both, I don’t know what’s going on!”

Kate added: “We have been trying to snog for years but when we get the chance…”

Susanna cut in: “Speak for yourself!” to which Ben quipped: “Me thinks she protests too much!”

Ben and Kate are both happily married to their significant others, while Susanna recently split from Steve Parish after nine months of dating.

During GMB last month, Piers Morgan asked Susanna: “Are you single again? You are aren’t you?” to which she replied: “Yep. Let’s not dwell. I’m fine, we’re fine, we’re very good friends. We were at the match on Saturday.”