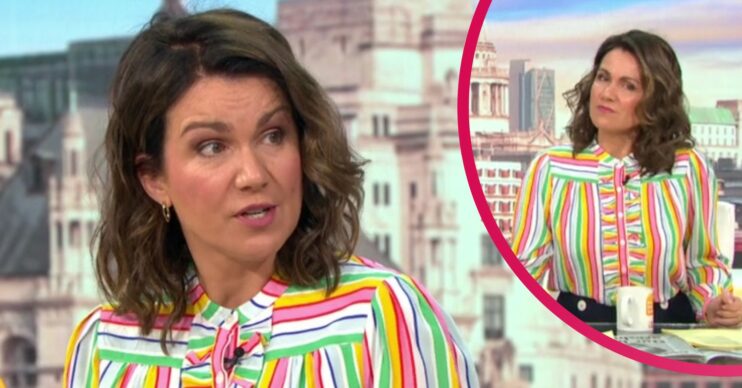 It was certainly eye-catching!

The 50-year-old host’s dress caught viewers’ eyes, and they took to Twitter to talk about it.

It wasn’t the topic of news stories or the change-up in hosts that had GMB viewers talking today.

Instead, it was Susanna’s choice of outfit that got viewers’ chins wagging online today.

The star opted for a very colourful top on the show this morning.

Susanna’s shirt was a mixture of green, yellow, white and pink vertical and horizontal stripes.

There was also a frilly pattern around the buttons.

What was said about Susanna’s shirt?

Susanna beat viewers to poking fun at her shirt by mocking it herself during the show this morning.

She and Ben Shephard were joined by Kate Garraway, as well as Vick Hope, who presented the showbiz news.

“Vick, lovely to see you as ever thank you very much,” Susanna said.

“Top collaring as well,” Ben remarked. “There’s been some collar jealousy from Kate.”

“It’s a lot of collar. I’m a cross between a Victorian gentleman and a clown and I’m here for it,” Vick said.

How did GMB viewers react to Susanna’s appearance today?

Plenty of viewers took to Twitter during the show to mock Susanna’s shirt. It’s safe to say that not everyone was a fan of today’s look.

“SUSANNA PLEASE CHANGE YOUR SHIRT… YOUR BLINDING ME,” another said.

Read more: Susanna Reid stuns fans as she shows off her new hair

“Susanna? Cleethorpes want their deckchair back,” a third joked.

“Susanna dress like a stick of Blackpool Rock,” another wrote.

Not everyone was mocking Susanna’s shirt though!

“Susanna absolutely love the top this morning looks like lovely,” one viewer said.

What do you think of Susanna’s shirt? Head to our Facebook page @EntertainmentDailyFix and let us know.