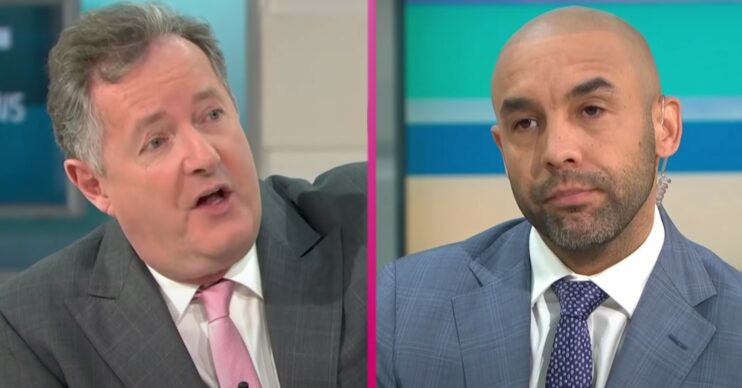 Linked Will Smith 'slap' to his storming off GMB set

Making reference to the Will Smith ‘slap’ incident at the Oscars, Piers indicated a reason for his strop off the GMB studio set over a year ago was to prevent him from dishing out a slap himself.

And although Piers didn’t refer to Alex by name, he did mention a “him” – and Dr Hilary Jones was the only other male on the set at the time.

Piers Morgan: What did he tweet ‘about Alex Beresford’?

TV presenter Piers, 57, told his Twitter followers he would “probably do the same” as Will Smith under similar circumstances.

He wrote: “So much snowflakey [blank] re Oscars smackdown.

“You can think Will Smith wrong to slap Chris Rock but still understand why he did it if he thought – incorrectly – Rock was deliberately mocking his wife’s alopecia in front of a gazillion people.

“I’d have probably done the same.”

However, one Twitter user took the mick by sharing an image of Piers theatrically walking off set following his March 2021 clash with Alex.

“Course you would!” they mocked Piers.

But Piers fired back: “Ironically, I walked out to stop myself slapping him…”

How has Alex Beresford reacted?

Since Piers’ tweet was posted last night, Alex has not responded on social media.

Alex has been online, though – he tweeted about the weather this morning (Wednesday March 30). But he hasn’t been active on his main Instagram account since March 11.

His handle was not tagged onto Piers’ tweet, however.

But those responding to Piers don’t seem to have tagged Alex to bring him into the thread, either.

And so Alex may not have even seen the post. Or he may just be getting on with his life.

Either way, he is yet to take any social media bait.

Ironically, I walked out to stop myself slapping him… https://t.co/4dJ7mxnPHh

Some respondents continued the debate about the Will Smith moment, with many dismissing it as a stunt.

But others chose to mock Piers for his big talk on Twitter, with a GIF of David Brent saying ‘Oh, you’re hard’ deployed several times.

And a third echoed that tone: “Of course you did.”