It appears that Good Morning Britain deleted a rather rude tweet about Ben Shephard during today's show.

To mark Friday 13th, the hosts were joined by a black cat called Duke in the studio as they discussed superstitions.

The show had shared a now-deleted video of Ben at the start of the show, telling his co-stars: "I'm not a professional pussy holder."

Would you consider any of these Friday the 13th superstitions bad luck? 🌚

Which one would you never do? Let us know 👇#FridayThe13th pic.twitter.com/3sGuYEsl4M

During the opening scene, Ben struggled to keep the adorable cat under control and it soon walked off set.

Kate Garraway told the presenter: "Just before we went on air I said, 'Ben, you're not holding that pussy properly. It's wriggling all over the place.'

"He said, 'Back off Garraway, I've got this under control."

Ben said: "I am not a professional pussy holder."

The pair's co-host Charlotte Hawkins shared a string of photos of Ben with the black cat.

The cat whisperer @benshephard in action as we go on air with @GMB - unlucky for Duke the cat who crossed his path! #Friday13 pic.twitter.com/lH8XpAFXQD

She captioned the post: "The cat whisperer @benshephard in action as we go on air with @GMB - unlucky for Duke the cat who crossed his path! #Friday13."

Meanwhile on the show today, Ben divided viewers with a comment he made to model and showbiz presenter Ashley James.

Hosting the entertainment and showbiz segment, Ashley dicussed Simon Cowell's recent comments about how he 'overdid' Botox in what he called "the Botox years".

Ashley said: "I think he said he did too much back then, I can’t confirm or deny whether or not he does he now."

Ben then joked: "Is that because your face doesn't move either?" 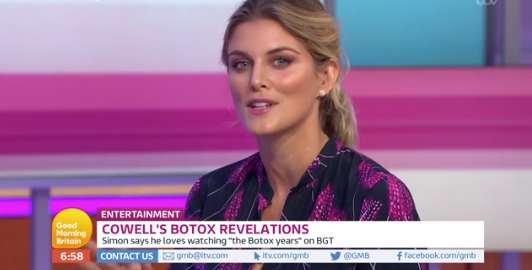 Ashley replied: "What are you saying?" as Charlotte exclaimed: "Ben!"

Kate added: "Her face moves! Her bones are barely formed she’s so young. She hasn’t got a wrinkle on her, goodness me."

Ashley then said: "I’m not blaming you. It’s Friday the 13th, I can’t blame you for that comment. And I’ve got natural lips."

Ben added: "Using that as an excuse, I love it."

Viewers had split opinions on Ben's comments, with one person writing on Twitter: "@benshephard oh dear think you may have upset Ashley there."

It’s Friday 13th!! What are your weirdest superstitions... would you walk under a ladder or let a black cat cross your path?? And should @benshephard smash that mirror or will it be 7 years bad luck?! @kategarraway @ashleyljames @GMB pic.twitter.com/KJHkjoW9ki

Another said: "Did @benshephard just say that to Ashley James that her face doesn’t move live on air?! How [expletive] rude. So awkward. She handled it very well."

However, one person found it funny.

One tweeted: "Quality TV on @GMB this morning with @benshephard calling out Ent Correspondent Ashley for having Botox."