Jade Kilduff, 18, and her brother Christian, four, have become internet sensations after she posted videos of them signing along to hit songs on her channel Sign Along To Us.

Christian, who suffers from cerebral palsy and is visually impaired, was described by doctors as a "miracle" after he stopped breathing for 24 minutes following birth but was resuscitated. 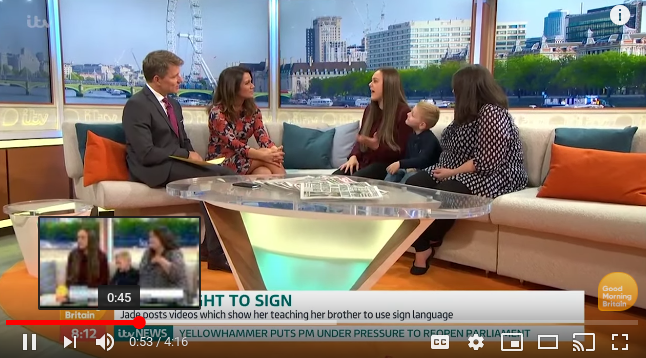 Jade said she never thought the videos would be so popular (Credit: ITV)

Appearing on GMB today, the teenager from Manchester said she never thought the videos would end up becoming so popular.

"It's definitely helped him. At first we were told he could never be able to communicate or even understand what we were saying." 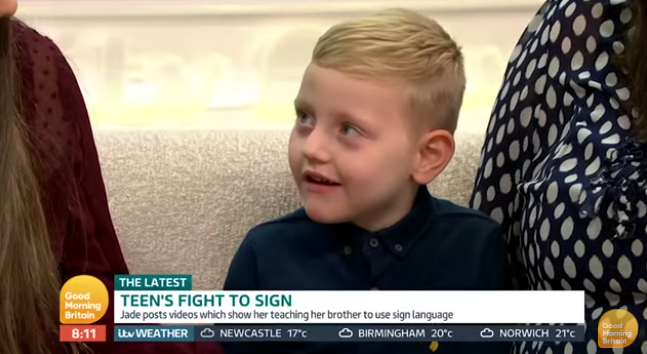 Jade explained she first posted the videos of Christian for family members to watch, but then strangers started watching and before they knew it it their clips were being watched by thousands.

"It's kind of just gone from there," Jade told hosts Susanna Reid and Ben Shephard.

At first we were told he could never be able to communicate or even understand what we were saying.

Read more: Meghan Markle heads back to work as her maternity leave comes to an end 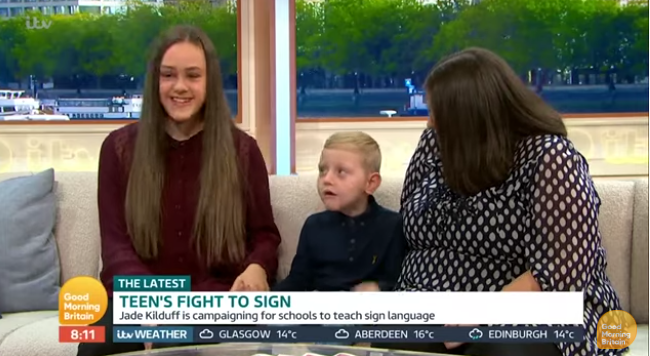 Jade wants basic sign language to be taught in all schools (Credit: ITV)

Jade and Christian have even got a celebrity following, with the likes of singers Anne-Marie, Lewis Capaldi and Gary Barlow retweeting them.

"Oh my gosh I've been so star struck," the teen said. "Anne-Marie retweeted our video and said she hopes to get to meet us one day."

Jade is now campaigning to get basic sign language taught in all schools.

@GMB What an inspirational young lady, Jade your parents should be very proud of you. Everyone should learn sign language. Absolutely love Christian. What a lovely family.

What a mature,caring,inspiring young woman you are Jade. A lot of people could learn a lot from you- not just signing! To seeChristian’s face light up is magical. You will go far in life. I agree let’s get sign taught in primary schools where little ‘uns would lap it up!

Viewers watching the segment flocked to Twitter to praise the teen and show their support for her campaign.

"Jade Kilduff on @GMB is such an incredible young lady and I hope this appearance leads to funding and support for her campaign to teach singing in schools."

A second wrote: "@GMB that young girl jade with her younger brother deserves an honour," while a third shared, "Jade you truly are an inspirational young lady. Mature, wise, loving and giving way beyond your years. It was a joy to watch you on GMB. Please carry on doing your amazing work."