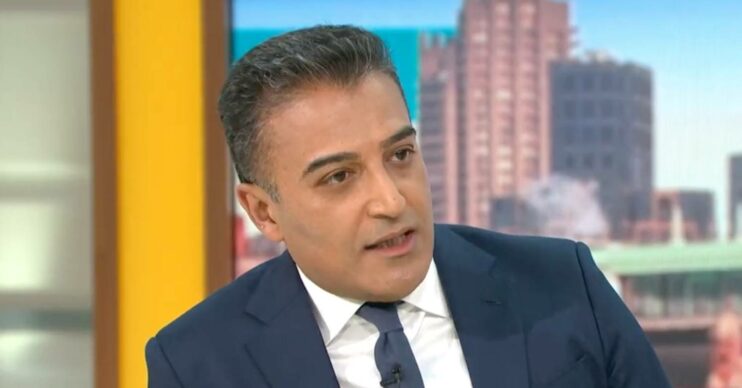 Guest claimed 'everyone was against him'

GMB viewers complained about presenter Adil Ray and his questioning style during a debate about migrants earlier today (June 16).

Hosts Adil and Kate Garraway were joined by journalists Martin Bell, Ayesha Hazarika and Quentin Letts for a news discussion.

But after a spluttering Mr Letts folded as Adil pressed him on the detail of the debate, the show guest threw a strop, claiming everyone else in the studio ‘was against him’.

The Times correspondent also moaned Adil wasn’t giving him chance to answer his questions. And that was also echoed by some of those watching at home who objected to Adil’s approach.

The cringeworthy exchange came as Adil pondered why Ukrainian refugees are treated so differently to refugees from Syria and Afghanistan.

He also asked why the visa systems operate in ways that aren’t the same, too.

“Because Ukrainians, as far as I know, aren’t washing up dead on the beaches of Dover,” Mr Letts claimed.

However, Adil responded: “That’s my point, they’re not because they’re allowed to apply online.

Mr Letts insisted “procedures” are in place to ensure those travelling from places such as Afghanistan do so legally.

However, Adil highlighted how Afghans don’t have access to an online system, and so there is a difference.

Mr Letts admitted he didn’t know about the specifics – and lost his cool as he spluttered over his words.

He erupted: “You ask me on this programme, you never let me actually answer a question.

“There are procedures, there are perfectly legal procedures for people to come in.

“But what the people using the boats are doing, they’re paying money to scoot around the rules.”

Adil pointed out again that legal routes do not exist, unlike for refugees from Ukraine.

But this seemed to push Mr Letts over the edge.

.@adilray and @thequentinletts debate why there are legal visa systems in place for Ukrainian refugees, but not for Afghan and Syrian refugees.

Watch GMB on ITV and on ITV Hub 👉 https://t.co/6iQ6ebeOEQ pic.twitter.com/0JbFvu5sAU

“It’s my job to correct you Quentin,” Adil replied.

But Mr Letts argued back: “It’s not actually. You ask me a question and then you don’t let me answer it.”

Adil then told the guest he was “missing the point” and he “can’t avoid” the legal route question.

But in an extraordinary outburst, Mr Letts whined: “There’s no point talking to you because the four of you are against me. It is just absolutely pointless.”

Kate waded in, telling Mr Letts: “No one’s against you.”

And a stunned Ayesha shook her head, insisting: “It is about looking at the facts.”

While many social media users praised Adil for his “impressive” line of questioning and “good work”, not everyone was pleased at what they witnessed.

One viewer complained: “Good old Quinton telling you to let him answer your question before asking another. You do it all the time. Get some lessons on how to interview or get another job.”

Another claimed: “Why is it everyone you ‘interview’ is never given a chance to respond? No point bringing them on TV if we can’t hear their point.”

Meanwhile, someone else saw it: “@adilray never lets anyone reply, if he doesn’t like the answer. Good for a laugh first thing in the morning, more like a comedy show.”

But another Twitter user wrote: “Absolutely fantastic watching you with Quentin Letts. He had no answer, of course he didn’t and threw his toys out of the pram.”

And someone else chuckled: “Oh dear Quentin not a happy camper this morning.”