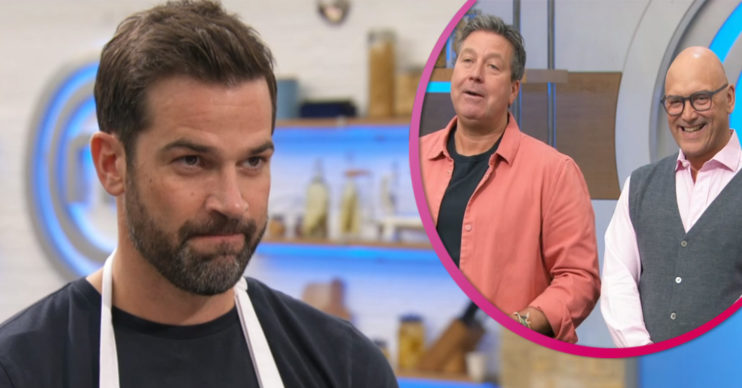 Gethin Jones has dropped out of Celebrity Masterchef after becoming ill.

The former Strictly Come Dancing star, 42, was forced to pull out of the show after coming down with coronavirus symptoms.

He says he is “gutted” but understands that he needed to keep both himself and those on the show safe.

If he made it through, he would have earned a place in the final three.

The series was filmed at the beginning of the year, when the nation was on extra high alert regarding COVID-19 symptoms.

What did Gethin Jones say about dropping out of MasterChef?

Read more: Martin Lewis quits GMB because he ‘can’t cope’ with the schedule

Sharing to his some 137,000 Twitter followers with: “Thank you for all your lovely messages re @MasterChefUK.

“I had symptoms of COVID-19 the morning of the next stage. Absolutely GUTTED… but it was the easiest decision. Would never put anyone at risk. Enjoy the next hour – these guys can cook!!!”

Dozens of Gethin’s fans replied with their disappointment and also get well wishes.

One user tweeted: “Get well soon Gethin, missing you on the programme but want you back soon.”

Another user posted: “What a shame to go all through to semis and then have to pull.out. You must have been so disappointed. Hope it wasn’t COVID and you are now back to full health.”

Read more: Wetherspoons breakfasts set for half price with Eat Out to Help Out discount

A third user wrote: “That was so sad for you, but at least you know how well you can cook. Well done to get as far as you did. I hope you feel better soon.”

And a fourth suggested: “So sorry to hear this but glad you are ok- would be great if you could do it next year. My money was on you. Take care.”

YouTuber and presenter Riyadh Khalaf went on to win the grand prize trophy of Celebrity Masterchef.

The 28-year-old said of his win: “I am absolutely in shock. I can’t believe it, it’s an incredible feeling.

“This show I have been watching since I was in school and to have gone from being a fan of the show to winning the thing – this is without a doubt the biggest achievement of my life.”