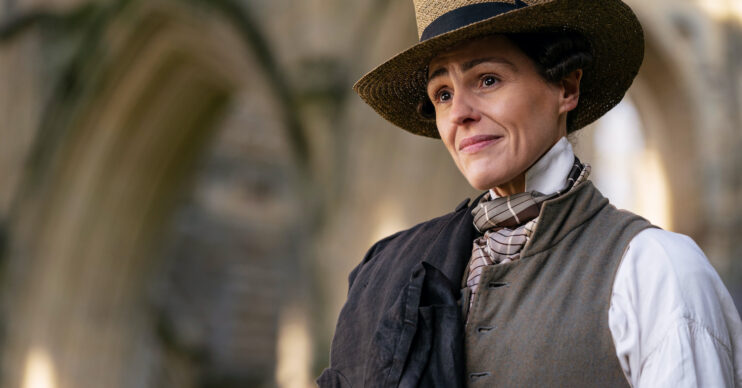 Where did we leave Anne Lister?

Gentleman Jack is back with season 2 so it’s time for a recap on season 1, which introduced us to Anne Lister, fireball 19th Century Yorkshire landowner and industrialist.

***Warning: spoilers from season 1 of Gentleman Jack ahead***

Anne Lister, as revealed in her volumes of coded diaries which remained hidden for decades after her death, ignored everything expected of a Victorian of her gender and class.

Demure manners, neat embroidery and a good marriage most certainly weren’t for her.

Instead, she was a waistcoat-wearing, man-confronting adventurer who, when it came to love, very much went the lady way.

While the locals in her West Yorkshire home of Halifax dubbed Anne Lister ‘Gentleman Jack‘ for her eccentric masculinity, history later hailed her as ‘the first modern lesbian’.

When we first meet Anne – played superbly by Suranne Jones – it’s 1882 and she’s arriving back from her travels to take over the family estate, Shibden Hall, in West Yorkshire.

It’s quickly clear that Anne’s headstrong character and strident approach might be a little much for her new surroundings.

When her coach driver breaks his arm, she literally takes the reins to take herself the rest of the way.

Then, metaphorically, ‘takes the reins’ of the estate by doing all the work a gentleman not a lady should: collecting rents, battling business rivals and even shooting her own dying horse.

Her ever eye-rolling sister Marian – played Game of Thrones’ Gemma Whelan – remarks: “It’s all well and good being different in York or Paris, but this is Halifax.”

But, as Suranne Jones’ portrayal of her shows, despite Anne’s brash behaviour, she was a woman of great heart and moral standing, who actually cared deeply for her family, her tenants and her ‘special’ female friends.

It’s not long before Anne is setting her trademark top hat (no pretty bonnets for Ms Lister) at Ann – albeit for her assets, not for love at this stage.

For the record there are a confusion of Ann/es in Gentleman Jack, since our Anne’s beloved aunt (Gemma Jones) – who lives at Shibden along with Anne’s sister Marian and father Jeremy (Timothy West) – is also called Anne.

Anyway, season 1 of Gentleman Jack has Anne and Ann’s romance threading through the heart of it.

Read more: Emmerdale cast 2022 – villains, victims and everyone in between

It’s a will-they-won’t they; can-they-can’t they relationship.

Anne, recently heartbroken by her previous girlfriend, is looking for distraction.

But they are thwarted at many turns. Mainly by Ann’s family.

Ever watchful of the many interested in her fortune and conscious of the gossip surrounding Anne, they keep a beady eye on Ann, variously trying to get her betrothed to men.

Of course, all’s well that ends well – yes, reader, she married her.

Not officially, of course. Same sex marriage has only been legal in the UK since 2014!

In real life, Anne and Ann exchanged vows and rings in February 1834, and took communion together at a local church that Easter Sunday to symbolise their union.

They lived together as wife and wife at Shibden Hall until Anne died in 1840.

To say Anne Lister led a wild life is an understatement.

Aside from travelling all over Europe, Scandinavia and Russia, she also had numerous lady lovers.

When Anne arrives in Yorkshire she is devastated because her Parisian girlfriend Vere Hobart (Jodhi May) has left her to marry a man.

But she’s even more upset when Ann is dispatched to Scotland to stay with her sister Elizabeth (Katherine Kelly) after suffering a mental breakdown over her sexuality.

Cue Anne trying to rekindle her relationship with her first sweetheart, Mariana (Lydia Leonard) – another married woman who says she won’t proceed until her husband has died.

The real Anne Lister was known for her bolshy business ways. And in Gentleman Jack she quickly finds a villain to fight.

It’s not long before taking over Shibden that Anne discovers there’s a richness of coal on her land.

But that corrupt local magistrate Christopher Rawson who, with his brother Jeremiah, has been stealing coal from her beds.

Read more: Bridgerton fans are intrigued by Simone Ashley’s height – and here it is

Of course, Anne isn’t going to stand for that. Even when Christopher Rawson sends a thug to beat her up.

“I think you underestimated me Mr Rawson,” she says. “With me being the gentler sex…”

While there’s more than enough drama in Anne’s life to keep you gripped, there’s just as much turmoil below stairs at Shibden.

But when Eugenie loses the baby she breaks off the engagement.

Anne gives eldest son Thomas (Tom Lewis) tenancy to secure a future for his mother and siblings after his father Samuel disappears – with Thomas claiming he’s gone to America.

But the truth is that Thomas kills Samuel, a violent drunk, when he attacks him – and feeds his body to the pigs.

Gentleman Jack season 2 begins on Sunday, April 9 at 9pm on BBC One.

Are you excited after reading this Gentleman Jack season 1 recap? Do you agree? Head to our Facebook page @EntertainmentDailyFix and let us know.