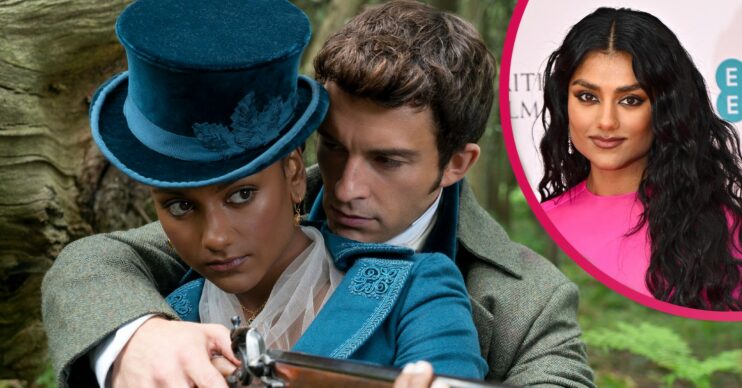 Bridgerton’s Kate Sharma: How old is Simone Ashley – and how tall is she?

Simone Ashley as Kate Sharma has well and truly stolen the limelight in Bridgerton season 2 but how old is the actress – and what height is she?

Read on for everything you could possibly want to know about Simone – and Kate.

The stunning actress plays the new arrival to the London scene, who falls for the eldest Bridgerton sibling and leading man, Anthony Bridgerton.

Kate Sharma is based off the character Kate Sheffield in the books, however, they changed her last name in the series to represent her Indian descent.

Simone told Glamour: “Representation matters, and yes, there is a minority that needs to be represented more, and I’m very aware of that…

“Everyone should be seen. I think we can all relate to each other in some way.”

So who is the new leading lady, Simone Ashley?

Who is Simone Ashley?

Fans of Sex Education will certainly recognise Simone Ashley, who plays the iconic role of Olivia Hanan in the hit Netflix series.

Sex Education featured a lot of risqué scenes, including Olivia trying not to let her boyfriend see her “ugly orgasm face”.

So Simone’s definitely not shy of a racy scene.

Simone told Glamour: “I felt really safe and I had a lot of fun on Sex Education, because we were portraying young people, adults, a whole range of different people experiencing the kind of things that we all experience in intimate situations.

“The highs and lows and the different problems.”

Read more: Full trailer for Bridgerton series 2 drops and fans have got ‘goosebumps’

Since then, the star has become very popular and portrayed roles in other hit UK dramas like Broadchurch and The Sister.

Now, Simone trades her high school clothes for corsets as she steps into the role of Kate Sharma in Bridgerton season 2.

Speaking to Wonderland, she said: “With Bridgerton, it’s much more intense than Sex Education in the sense that if I’m not filming, I’m horse riding, training or in rehearsals.

“I’m in accent training or I’m in fitting… I’ve never really worn a corset before so that took some getting used to.”

Where is she from?

Simone Ashley is from Camberly, Surrey.

Later on, her family moved to Beaconsfield whilst Simone attended Redroofs Theatre School in Maidenhead.

She eventually went on to train in acting at Arts Educational School in London and pursued her dream of becoming an actress.

As far as we know, the Bridgerton star is not married.

Simone has kept quiet about her relationship status and has chosen not to reveal anything about her personal life.

How tall is she?

According to a model profile on Bellazon, Simone Ashley is around 178m tall which is about 5ft 10in.

So yes, that’s pretty tall for a modern-day woman – and practically unheard of in the 19th century. Most men wouldn’t have reached that height, let alone the ladies.

Who does she play in Bridgerton?

According to Netflix: “Kate is a smart, headstrong young woman who suffers no fools – Anthony Bridgerton very much included.”

Kate Sharma is a newcomer to London, who’s looking to find her sister Edwina Sharma a love-match.

However, when she meets London’s infamous rake, Anthony Bridgerton, she becomes torn between true love and loyalty to her sister.

Bridgerton fans certainly have a lot to look forward to regarding Kate and Anthony’s love story!

“They have a lot of friction at the beginning because they resonate with whatever traits that annoy each other within themselves, and then that breeds chemistry.”

Simone also opened up to Glamour about the challenges she faced taken on the role of Kate Sharma.

The star mentioned how wearing the corset changed her body and posture a little bit.

She said: “On my first day, I was like, okay, first day as leading lady, got to eat loads of food, be really energised’. So I had this massive portion of salmon and that’s when I needed to be sick, basically because I was wearing the corset.

“I realised when you wear the corset, you just don’t eat. It changes your body. I had a smaller waist very momentarily. Then the minute you stop wearing it, you’re just back to how your body is.

“I had a lot of pain with the corset, too, I think I tore my shoulder at one point.”

Author of the Bridgerton books Julia Quinn shared her excitement about the casting.

She posted on her Instagram: “I couldn’t dream of a more perfect Kate. I mean, just LOOK at her expression in the first photo!”

What else has she been in before playing Kate in Bridgerton?

Simone is most known for her role in the hit Netflix series Sex Education.

She also played Dana in Broadchurch season 3, opposite David Tennant and Olivia Colman.

Her Bridgerton love interest, Jonathan Bailey also starred in Broadchurch as Olly Stevens, although they didn’t appear in the same season together.

In 2020, the star also took on the role of Elise Fox in the ITV thriller The Sister.

Simone even features in the Hollywood movie Pokémon Detective Pikachu.

Are you enjoying Simone as Kate in Bridgerton season 2? Head to our Facebook page @EntertainmentDailyFix and let us know.