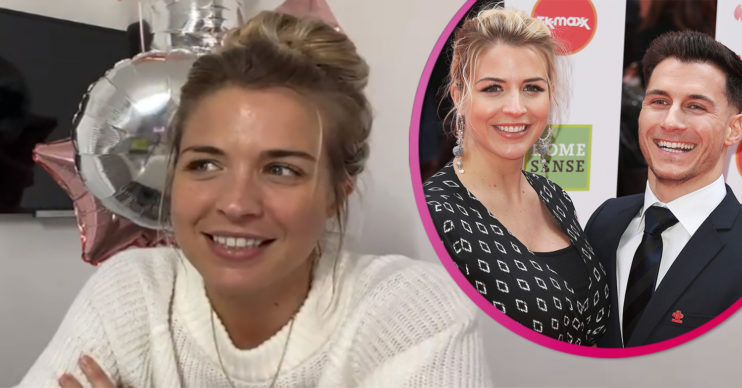 She is dating dancer Gorka Marquez

Actress Gemma Atkinson has cleared things up after she made a comment about a wedding on Loose Women today.

The former Emmerdale actress, 35, was discussing how she’s going to be celebrating her daughter Mia’s first birthday tomorrow (July 4).

She said: “Mia is teething at the minute so she’s in quite a lot of pain.

“It’s flown by. Everybody said to me, ‘take loads of pictures because the first year goes quick.’

“I was thinking, ‘Goes quick? The nights are endless!’ But it has flown by.”

“It may have to be garden stroke kitchen depending on the wedding.”

Gemma obviously meant to say “depending on the weather” but her comments left viewers speculating.

Christine's on the case…

One person said on Twitter: “Did you notice Gemma said wedding instead of weather!

Another wrote: “Did she just say wedding instead of weather?”

Did u notice Gemma said wedding instead of weather ! Maybe a secret wedding on mia’s birthday

Did she just say wedding instead of weather? #LooseWomen

At the end of the interview, host Christine Lampard addressed the slip-up.

Christine told Gemma: “Gemma, we are inundated with comments and it may have just been a bit of a slip earlier on.

Did you notice Gemma said wedding instead of weather!

“People seem to think you said ‘wedding’ accidentally when you were meant to say ‘weather’.

“They’re trying to say, are you hiding something this weekend? It’s not just going to be a birthday party but it could be a bigger celebration and you’re just not telling us.”

Laughing, Gemma replied: “No, do you know what, we’re not really fussed about getting married.

“We have said if we were ever to do it now we would wait until Mia’s old enough so she could be involved.”

The couple were thrilled when they welcomed little Mia in July last year.