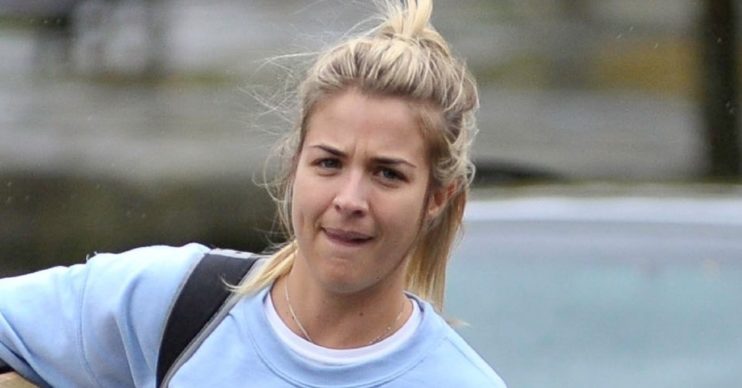 Soap star Gemma Atkinson has revealed she once sparked a warning ‘memo’ from Hollyoaks bosses over X-rated drawings that kept appearing backstage.

The 35-year-old, who joined the Channel 4 show in 2001 and played Lisa Hunter for four years, featured in a video chat this month with her former co-stars Alex Carter and Kelly Condron.

During their conversation, which saw them discussing their time on the programme, they mentioned Gemma’s love of doodling.

What did Gemma do?

Kelly said cryptically: “We both know what kind of artwork you’re talking about, Gem. But which one of you wants to tell the viewers at home about the…”

Gemma interrupted her to say: “Rockets.”

But Kelly was sceptical that the drawings were actually rockets.

Alex, who played Gemma’s on-screen brother Lee Hunter, recalled that she “had a thing” for drawing “phalluses”.

The three of them burst out laughing and he continued, thinking back: “If I remember correctly, it got that bad there was a memo that came around… an official memo to ask to stop drawing.”

It got that bad there was a memo.

Gemma explained that the penis drawings were “normally on the scripts”.

She explained how someone would be “casually flicking through” a script before flagging down the director, to show them “a note” – before holding it up the page to reveal a “big rocket” drawing.

Gemma left Hollyoaks in 2005 and went on to star in shows such as Waterloo Road and Casualty.

Read more: Gemma Atkinson reveals why she won’t be making a return to Emmerdale

More recently, she joined the cast of ITV soap Emmerdale, where she played the part of Carly Hope from 2015 until her departure in 2017.

That year, Gemma featured on the line-up on Strictly Come Dancing. While taking part in the popular BBC dancing competition, she met pro dancer Gorka Marquez.

In July last year the pair welcomed their first child together, daughter Mia.