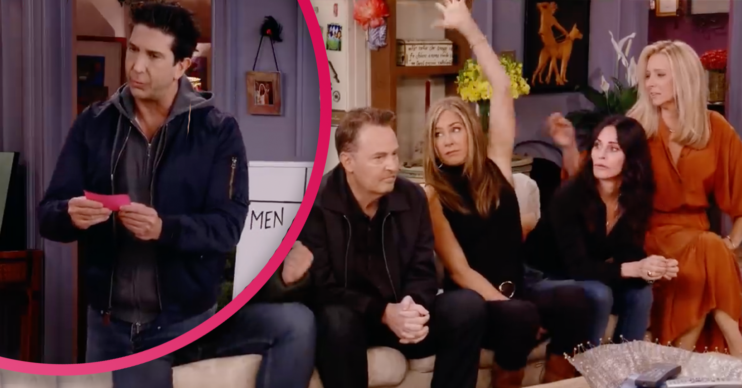 Friends reunion: UK viewers will be able to watch on Sky and Now NEXT WEEK

Could we BE any more excited after seeing the trailer?

Friends fans in the UK and Ireland will be able to watch the reunion next week.

Sky today (May 21) revealed that it will exclusively air the reunion on Thursday May 27.

It will also be available on Now TV.

What did Sky say about the Friends reunion airing in the UK?

It was widely believed that Sky would secure the rights to the reunion special.

When the trailer dropped fans were whipped into a frenzy, with many asking how do we watch it in the UK?

Well, now we know – and we’re more than happy to pass on the news!

Sky said: “Highly anticipated FRIENDS: THE REUNION will be available exclusively on Sky and streaming service NOW in the UK & Ireland. The TV special will air on demand from 8am and on Sky One at 8pm on Thursday 27 May.”

The statement added: “The long-awaited get together will see “Friends” stars Jennifer Aniston, Courteney Cox, Lisa Kudrow, Matt LeBlanc, Matthew Perry, and David Schwimmer return to the iconic comedy’s original soundstage, Stage 24, on the Warner Bros. Studio lot in Burbank for a real-life unscripted celebration of the beloved show.”

The beloved sitcom remains one of the most popular TV shows of all time, and now the gang are back together.

Friends ran from 1994 to 2004 and made its actors international stars.

The HBO Max special marks the first time the stars have all been together in once place since the show ended.

“Does Courteney still have her lines written on the table?” jokes Matt.

The gang also re-create some of the show’s most famous scenes, including The One Where Everyone Finds Out.

While chatting in Central Perk, Jennifer tells the group: “I remember I went to the producer of the show I was working on and he told me that this show wasn’t going to make me a star…”

James Corden is hosting the reunion special, and will be asking the actors questions in a chat show format.

There will also be a string of celebrity cameos, including the likes of Lady Gaga, David Beckham and Justin Bieber.

Fans rushed to social media to share their excitement over the trailer’s release.

no i don't think you understand it actually feels like i am meeting my best friends after a long time #friendsreunion pic.twitter.com/MCEcfaigiS

Since the show ended, streaming services have helped it maintain its popularity around the world.

In fact, it remains one of the most watched shows on Netflix despite now being almost two decades old.

The streaming service was the target of a huge fan backlash last year when it was revealed the show would be leaving the platform.

How can I watch in the UK?

The reunion special will air on HBO Max on May 27.

Viewers in the UK can stream the hour-long episode the same day from 8am on Sky and Now.

It’ll air that same night at 8pm on Sky One.