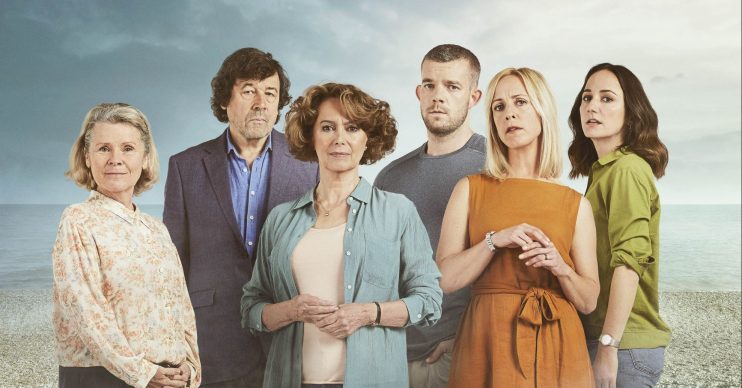 Only the first episode in on this new ITV drama, and the list of suspects on Flesh and Blood is already as long as your arm.

Viewers knew something sinister was afoot from the very first moment, when police were seen flocking around what looked like a body in the very first scene.

The action then moved to an idyllic house on the Sussex coast, when Vivien (Francesca Annis) was seen welcoming her children to a party, in which she revealed that she had found a new man.

They were not happy with the news, as it was only 18 months after the death of their father, Vivien’s husband.

One by one, it was revealed that Vivien’s children have more than enough problems of their own.

Personal trainer Jake (Russell Tovey) is estranged from the mother of his children thanks to a gambling debt, but that hasn’t stopped him from sleeping with one of his wealthy clients.

All I’m saying is that I’m glad I don’t live next door to Imelda Staunton!

Daughter Helen (Claudie Blakley) was shown to be a bit of a boozer as she struggles to cope with a stressful job in the NHS, while her husband rejects her physical advances, and her daughter films her throwing up after one to many.

And Natalie (Lydia Leonard) was revealed to be having an affair with a married man, who also happens to be her boss.

As if all that weren’t enough, Vivien’s new partner, played by Stephen Rea, was seen to behave in a very suspicious way indeed. He was first seen rummaging around in Vivien’s things, and then, as Vivien suffered from a mystery collapse, he was seen pressurising her to rush into marriage.

Throughout all this, the action periodically harked back to a conversation between neighbour Mary (Imelda Staunton) and police, presumably about the crime teased in the first scene.

Mary was seen telling police “I keep myself to myself” but it is not long before this was revealed to be untrue. Mary steamed open a parcel meant for Vivien – a silky night gown – and ended up wearing it herself.

Her constant monitoring of her neighbour has made her a pretty good witness, but it came across as creepy to most of the viewers who tweeted about it.

She became one more suspect in the four-part series, which continues tomorrow night.

“Could go anywhere,” one wrote.

“The kids are arguing about money. They’ve killed their mother for the inheritance,” was the theory of another.

But it was Imelda’s character Mary who drew the most suspicion from others. “All I’m saying is that I’m glad I don’t live next door to Imelda Staunton!” tweeted one viewer.

Another said it was Mark (Stephen Rea) who looked the most dodgy. “That guy is poisoning her,” he tweeted, referring to the mystery collapse. Mark’s former job as a doctor made him look all the more suspicious to some.

Yet another viewer wondered what Helen’s daughter was up to when she secretly filmed her. “Is she going to use that footage of her mum for blackmail?” the viewer tweeted.

All will be revealed over the coming days – but one thing is already clear… “Totally selfish dysfunctional family,” one viewer wrote on Twitter.

We will have to tune in to find out just how dysfunctional they can get.

All I’m saying is that I’m glad I don’t live next door to Imelda Staunton! #FleshAndBlood

Is she going to use that footage of her mom for blackmail? #FleshAndBlood

The kids are arguing about money. They’ve killed their mother for the inheritance #fleshandblood

That guy is poisoning her 🙄 #FleshAndBlood

Flash and Blood continues Tuesday, Wednesday and Thursday at 9pm on ITV.

What did you think of it? Visit our Facebook page @EntertainmentDailyfix and leave your comments.