Fans of Channel 4's First Dates Hotel were thrilled to see Ulrika Jonsson get on so well with Bristolian silver fox Paul on this week's episode.

Following her divorce from third husband Brian Monet earlier this year, 52-year-old Ulrika headed along to the First Dates Hotel to see if she could find romance, and was matched with the 48-year-old.

And the pair appeared to hit it off as no topic was off limits over their romantic dinner, with them covering everything from past marriage breakdowns to banana sandwiches and Ulrika losing her dad when she was just 27.

This was a wonderful match! Just so lovely to see them both enjoying each other's company and the laughter! 🤣😂🤣

At one point Paul made her laugh so much she admitted she was going to "genuinely wet myself".

"This was a wonderful match! Just so lovely to see them both enjoying each other's company and the laughter," one fan wrote. 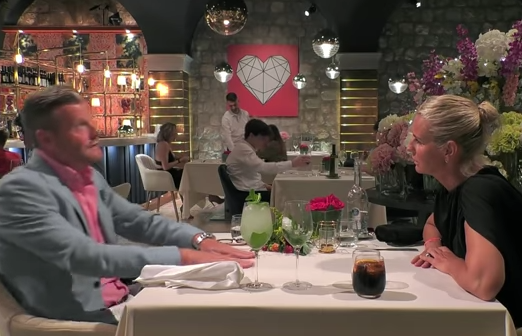 The pair shared plenty of laughs over dinner (Credit: Channel 4)

This was a wonderful match! Just so lovely to see them both enjoying each other's company and the laughter.

"Great to hear her laugh," said a second, while a third remarked: "Loving Paul and Ulrika on First Dates Hotel."

Others who missed the episode were keen to know if the pair agreed to a second date - and it looks like they did.

"After hitting it off in Italy, Ulrika and Paul returned home where the laughs keep coming," it was revealed at the end of the show.

The pair shared plenty of laughs and even got philosophical at one point, with Ulrika telling Paul: "I think we’re all chasing something.

This prompted him to ask: "Do you think you’re chasing something?"

"I’ve got arthritis in both hips and a lower back problem," she laughed.