The series filmed in Italy returns with its sixth series...

First Dates Hotel series six was filmed at the Aquapetra Resort & Spa in Italy BEFORE the Covid-19 pandemic.

As a result, the cast were able to travel to the beautiful location to help hopeful singletons find love.

Fred Sirieix returns to the famous restaurant and hotel, alongside his famous waiting team.

Cast members include Merlin, Laura, Cici, Austin and Grant – see below for more about the team.

Fred Sirieix is the French maître d’hôtel who oozes charm and genuinely seems to want the singletons to find love.

His sexy accent alone is enough to get the hopeful daters in the mood.

Fred trained to work in front of house at a Michelin-starred restaurant in France before moving to London.

After his likability won him the role on First Dates and First Dates Hotel on Channel 4, he starred in the hit ITV show Gordon, Gino and Fred: Road Trip.

Fred is engaged to be married, and has two children with his previous partner.

His daughter Andrea Spendolini-Sirieix is a diver aiming for Olympic glory.

She recently won the BBC Young Sports Personality of the Year 2020.

As well as being a hostess with the mostest, she also has several acting credits under her belt.

As well as her job welcoming hopeful singletons on First Dates Hotel, CiCi is a trained Hot Pilates teacher.

Laura Tott was sadly absent from the recent series of First Dates.

As a result of the restaurant moving to Manchester and Laura’s ‘real job’ as a paramedic, she wasn’t able to take part.

Luckily, as this sixth series of First Dates Hotel was filmed pre-COVID, she was able to fly to Italy and join the rest of the cast.

Laura, 26, appears as a waitress in the dating show.

As well as waitressing, Laura is a paramedic for the NHS.

She completed three years of training to become a fully registered paramedic.

Grant’s experience in hospitality working in pubs helped him land the Channel 4 job.

The waiter also provides some eye candy for the viewers!

He has theatre credits under his belt and regularly posts videos of himself singing and playing the guitar on social media.

The former York College student, 26, has said it was his experience as a waiter at The Biltmore Bar and Grill and The Cross Keys pub in York that helped him land the job on the C4 series.

Grant, who moved to London to study at the Italia Conti Academy of Theatre Arts, says he has brought his “northern charm” to the show.

Austin is an aspiring actor, model and an accomplished dancer.

He worked as an extra for a number of years before appearing on First Dates Hotel.

He has previous experience in the hospitality industry, working at both Jamie’s Italian and The Breakfast Club.

The Londoner, 26, is expecting his first child with long-term girlfriend Katie Moore, a make-up artist.

Merlin is the staff member who will work his magic behind the bar.

The 42-year-old has been a mixologist and bartender for more than 20 years.

He now owns his own bar and restaurant in north-west London called The Priory Tavern.

He’s been with partner Lucile for more than 10 years.

The couple met at a cocktail competition more than a decade ago, and they share one child together. 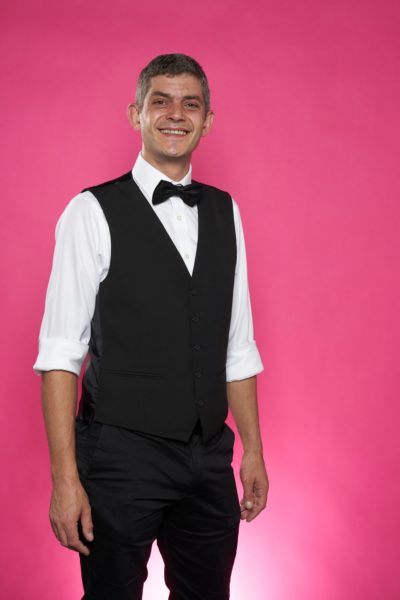 First Dates Hotel: How to apply

If you fancy finding love in front of millions on television or just fancy getting in sniffing distance of Fred Sirieix – you just know he will smell sexy as hell – then it couldn’t be easier.

Just click on this link and fill out the application. Bonne chance!