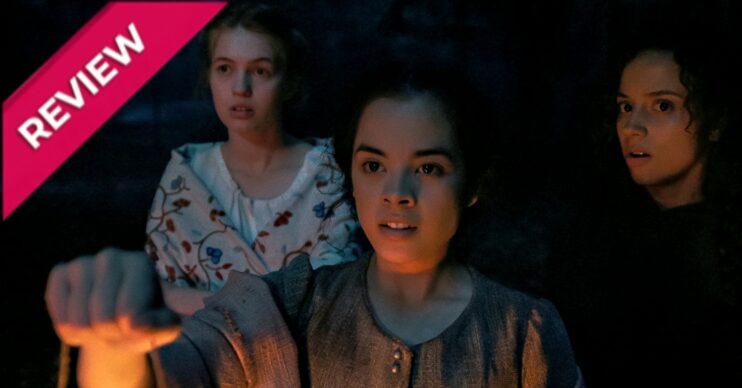 Fear Street Part Three takes us back to 1666 to finish the mystery of Sarah Fier and the dark past of Shadyside.

In a bid to end their town’s ‘curse’, lead character Deena is transported back three hundred years and into the body of Sarah, the mysterious ‘witch’ that supposedly marked the town.

Armed with a dodgy Irish (we think…?) accent, and a lot of familiar faces, Deena soon discovers not everything is as it seems.

While 1994 focused on Scream-like slashers, and 1978 was celebrating the summer camp horrors, 1666 delves into the legends of witches. Specifically, a Crucible-style, Salem witch trial in the town known at the time as ‘Union’.

Before the years of Shadyside and Sunnyvale, the small village in progress is highly religious and highly suspicious – and therefore easily susceptible.

So for Sarah, who has a forbidden lesbian affair with the town priest’s daughter, she’s living a dangerous life.

Urged to marry the brooding and handsome Solomon Goode, Sarah is content looking after her family’s pigs with her brother.

However, after a night of messing around with friends in the woods to mock their own local ‘witch’, things soon going sideways for everyone.

The story has a lot of ground to cover considering it’s wrapping up the four hours of content that came before it, but it does a stellar job.

Answers are finally found in 1666. And this sets the stage for the third act – where the gang attempt to end the curse once and for all.

While our time in 1666 is by no means boring, Fear Street Part Three really picks up the pace in the second half of the film, and never once loses its sense of charm.

Fear Street as a whole is, at its heart, a love letter to horror stories of days gone by.

But it also delivers some fresh twists, notably subverting certain tropes in order to keep audiences on their toes. It’s not gone unnoticed that the ‘bury your gays’ stereotype – guaranteeing an early grave for anyone in the LGBT community – has been completely flipped on its head so a lesbian love story becomes central here.

But then again, there are certain other tropes that we wish they avoided but they didn’t. Certain beats and storylines are an almost guarantee for anyone half-aware of these types of films.

Which, if you grew up reading R.L. Stine, is everyone watching.

It’s a bit of a shame, and moments that should have some punch become a bit of a let down.

Is Fear Street Part 3 worth the watch?

Fear Street Part 3: 1666 is, unfortunately, the weakest of the three installments. But that doesn’t mean it’s bad, and does at least provide a satisfying conclusion to the film trilogy as a whole.

The 1666 part of the story is slow and at times an awkward watch. Particularly when it comes to the cast’s floating Irish accents that appear and vanish at will.

It’s the 1990s where most of the fun is in this part of the tale. Seeing the gang band together for the final showdown, and what it means, is an enjoyable watch.

The twist is very predictable though. For films an homage of horror movies gone by, it seems a disservice they go down the obvious route.

It’s a good casual watch though, and leaves us hopeful for more in the future.