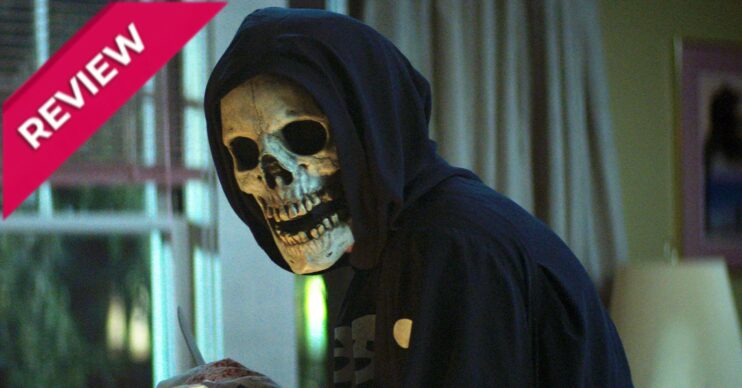 Fear Street Part One: 1994 is bringing R.L. Stine back to the masses – and giving fans a little nostalgia trip along the way.

Any 90s kid will know about the delights of Goosebumps, the horror TV and book series for kids that may have paved the way for the emo generation when they hit their teens.

Fear Street is a slightly grittier version of that, with high stakes as a killer is let loose around the fictional town of Shadyside.

Shadyside has quite the history. In fact, it’s the Killer Capital of the USA. Yet people continue to live as much of a suburban life there as possible.

While their neighbouring town Sunnyvale continues to thrive, a horrifying slew of killings continue to drag down the area.

The first part of this trilogy, set in 1994, starts as it means to go on, with an homage to the slasher genre and very reminiscent of Scream – complete with Stranger Things’ Maya Hawke being chased around a mall.

From there, we meet Deena, who is dealing with her first heartbreak. What’s more, her ex (and closeted) girlfriend Sam is unavoidable at the big football game.

While Sam has moved to Sunnyvale, Deena and her pals reside in Shadyside. Then a literal collision triggers a chain of events that force them to work together.

Turns out, an old wives’ tale of a curse inflicting the town might actually be kind of true. Which is bad news when it means they start coming for you.

With a rag-tag group of pals in tow, Sam and Deena have to figure out what’s going on before the killers get to them.

The supernatural element of the show is what separates the series from the rest of the 90s slasher pack. What’s more, these aren’t your typical ‘running up the stairs instead of out the door’ victims. This gang is smart, and they’re willing to fight back.

It results in some pretty clever thinking from everyone involved as they try and crack why they’re suddenly the target of this mysterious witch.

The team also didn’t miss a trick by ensuring the soundtrack was era perfect. Nine Inch Nails, The Prodigy, and Radiohead are all present and correct, alongside a hilarious decision to include Sophie B. Hawkins’ Damn, I Wish I Was Your Lover.

Part one knows the tropes of horror inside out, and uses viewers’ expectations to subvert them on occasion. It also plays into them at points when it needs to.

With two more landmark time periods on their way, it’s interesting to see how they’ll tie in.

Fear Street: 1994 is a much-appreciated touch of nostalgia, but how it translates for the two other time periods in the upcoming sequels remains to be seen.

It’s not exactly breaking the mold in terms of the horror genre, but there are some creative kills and some interesting twists to keep you going.

The series also gets some snaps for its LGBT representation, which horror has a habit of overlooking or demonising.

However, it’s a bit of a tricky one to pin down whether it’s worth investing so much time on, seeing as there are two more, two-hour films coming out over the next two weeks.

Overall, it’s an easy watch if you’re wanting something to pass the time. It’s definitely one for the Goosebumps kids of days gone by.

Fear Street Part One: 1994 is available on Netflix now.