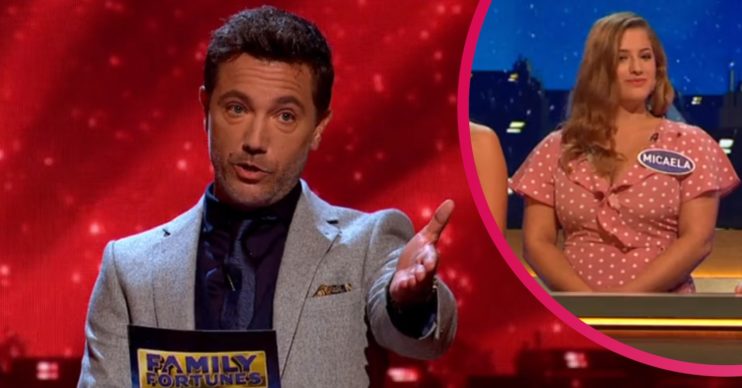 She was part of the Phillips family from Bristol

During Sunday (October 11) evening’s episode of the popular ITV game show, Micaela Phillips from Bristol was on with her mum Enza, dad Stuart and sisters Sophia and Alessandra.

“We all work for the NHS,” Micaela explained. “Sophia and I are healthcare assistants and Alessandra is a midwife.”

What happened with Micaela during last night’s Family Fortunes?

Praising Enza and Stuart’s daughters in the studio, host Gino D’Acampo said: “You have triplets. They have grown to be three amazing, beautiful girls. Bellissima! Bellissima!”

The Phillips were playing against the Buckley family from Bury in Greater Manchester – mum Lynn, her daughter Shaunnie, son-in-law Lewis, son Chris and his husband, Kean.

Read more: Gino D’Acampo reveals his plans for Fred Sirieix’s stag do and why he won’t renew his own vows

At the end of the episode the Phillips family won the main game; therefore Enza and Micaela got to play in the Big Money round.

“This is daunting,” Micaela said as she prepared herself.

“Am I making you nervous?” Gino joked.

“It’s those big blue eyes, Gino,” she told him.

However, the mum stumbled on one of the questions when she failed to think of an animal that begins with the letter M. That’s despite feeling confident.

They have grown to be three amazing, beautiful girls. Bellissima!

The presenter laughed: “Why is everybody blaming my eyes now? Next time I will wear sunglasses.”

What did Family Fortunes viewers say?

On Twitter, following the episode and while it aired, ITV viewers were bowled over by ‘beauty’ Micaela.

One tweeted, with a heart-eyes emoji: “#FamilyFortunes Micaela OMG.”

Another simply wrote, “Micaela” alongside a GIF of Dwayne ‘The Rock’ Johnson lowering his sunglasses.

A third, who was also taken by Micaela’s looks, called her “a beauty”.

“Micaela is so fit omg,” said another with a fire emoji.

Micaela is a beauty #familyfortunes

Similarly, a fifth said: “More of Micaela is welcomed #FamilyFortunes.”

“Oh Micaela on #FamilyFortunes is a babe!” said another.

More of Micaela is welcomed #FamilyFortunes

Another episode will air next Sunday (October 18) as the series continues at 8pm on ITV.