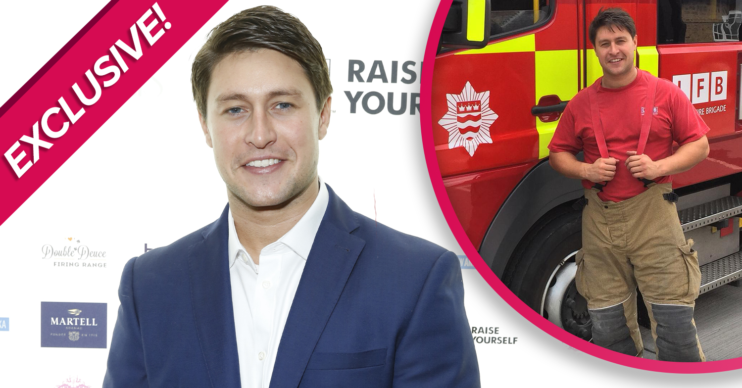 And he has a pretty decent storyline idea for his comeback!

Former EastEnders star Tony Discipline has spoken for the very first time about retraining as a firefighter.

Tony played Alfie Moon’s cousin Tyler Moon in the BBC soap from 2011 till 2013, when his character left to work on a cruise ship with his on-screen brother Anthony (Matt Lapinskas).

However, admitting that being an actor can be an “up and down career” in terms of finding work, Tony took matters into his own hands and retrained.

As a firefighter for the London Fire Brigade, no less.

What did EastEnders star Tony Discipline say about his new career?

Two months later he was assigned to a station and started his new role.

He said: “After EastEnders I was still acting, but acting is an up and down career – it’s not necessarily constant work.

“After I left the soap I had some good parts in other stuff and started a few businesses. Few worked, a few didn’t.

“But you’ve got to put food on the table, so I was always looking at different options.”

Explaining how he came to sign up to be a firefighter, Tony said one of his best friends already worked for the fire brigade and told him they were recruiting.

“I really liked the idea of it and just went for it, jumped in with two feet, applied and, 18 months later, managed to get through and started training.

‘You don’t get a chance to be scared’

Tony doesn’t appear phased by the potential dangers of his new role, which are a world away from Albert Square.

He told ED!: “When you arrive at an incident you don’t really get a chance to get scared or think about that, you’re just concentrating on what you’ve got to do.

“You don’t really get a chance to get scared, the job’s at hand and you’ve just got to get in there,” he said.

And get in there he has.

“We’ve had quite a few fires now and luckily enough everyone’s been evacuated safely.

“We’ve saved some animals as well, the typical fire brigade things,” he quipped.

“I saved a pigeon which I’m quite proud of – we went to a tower block and it was caught in the netting. Every day is different in the fire brigade.”

So when he’s called out to an incident, has Tony ever been recognised as his BBC character?

“One time we were on the street and someone thought I was filming for something.”

Would Tony return to EastEnders?

On the subject of filming, can Tony ever see himself returning to the soap that made him a household name?

“Acting is my main passion in life, I’ll always be acting,” he said. “That’ll always be a huge part of my life. Who knows what the future holds.”

Tony admitted that he still watches EastEnders and confirmed that he would “love” to make a return as Tyler Moon.

“It’s always down to the writers and the storylines but I’d always consider it, I’d love to to be honest.

“I still speak to Shona [McGarty] quite a lot, who plays Whitney. Obviously Whitney and Tyler were in a relationship for a while.”

And Tony even has a new storyline idea up his sleeve, should the show’s writers be reading…

“She doesn’t have the best luck with guys, does she, let’s be honest,” he said of Whitney.

“I think he’s on a cruise at the moment but it’d be quite funny if Tyler was late for the cruise, missed the cruise and ended up working at a holiday camp at the coast.

“And then he comes back to the square and he’d have all these made-up elaborate stories of his travels.”

He added: “At the end of the day we’re only on this earth once, so you’ve got to make the most of it.”

The ladies love a fireman

It’s pretty much an accepted fact that the ladies love a fireman, so how is Tony’s love life looking?

“Apparently, that’s what they say,” he quips.

“I’m single at the moment. Obviously with lockdown it’s not the best time to meet anyone.”

So he hasn’t had any cheeky offers to slide down his fireman’s pole, then?

The lucky lady will have to make her mark soon, though, as it appears Tony might have have Hollywood in his sights.

After leaving EastEnders, he revealed he headed out to Los Angeles to try and “crack the American dream”.

He said: “It was a really good experience and I really enjoyed it but I came home after five months.

“It was a great learning curve so if and when I do try it again I’ll be a lot more prepared for it,” he added.

Next up for the actor turned firefighter, though, are two films, which are both out this year.

Tony will be seen in crime drama The Drugs Game and sci-fi flick R.I.A.