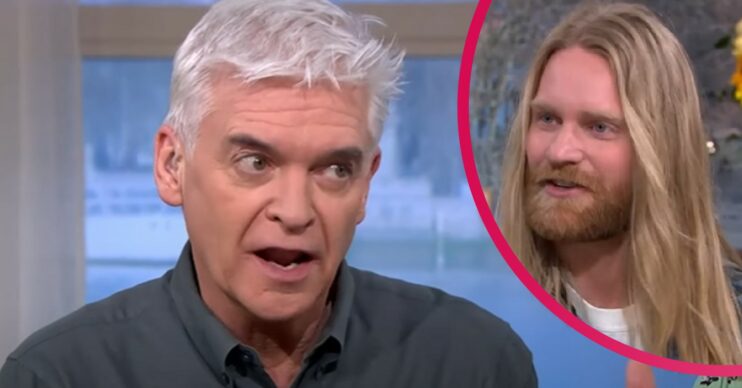 Sam is representing the UK in the singing contest this year

UK’s Eurovision entry Sam Ryder appeared on This Morning today but the interview sparked some complaints from viewers.

Sam will be representing the UK in the Eurovision Song Contest this May.

However, Phil didn’t seem to have much faith in the UK winning the contest this year.

As he appeared on the show, Sam was seen waving Union Jack flags in the studio before his interview.

Read more: This Morning in another presenting shake-up after Holly Willoughby’s enforced absence

However, Phil said: “I think it might take more than waving a flag.”

Sam later joined Phil and Josie Gibson on the sofa and discussed the upcoming contest.

Phil admitted: “I love the show but I can’t watch the scoring. It drives me crazy.

“When you look at all the blocks, all the individual blocks and the little cliques you think, they don’t like us!”

He later said: “I want you to win so badly. I can’t tell you. And every year, as a nation, we send our hopeful off…. to try and do the thing, last year with James Newman.

“Off you go James! But then, oh God, he’s coming back with nothing.”

Sam laughed off Phil’s comments and said: “I can’t let that psych me out too much.”

At the end of the interview, Phil said: “I love the spirit of Eurovision and the fact that no matter what everyone’s difference is, it tries to bring you all together.

“I would love for you to go there and you have us all behind you. Get out there, be triumphant, be amazing and have a great night.”

Sam added: “Appreciate you both. Such lovely energy.”

However, people watching from home, weren’t keen on Phil’s ‘negativity’ at the start of the chat.

One person said: “For God’s sake Phil, stop being so negative towards Sam Ryder and Eurovision. Let him go and do his best and enjoy it.”

Another wrote: “It was a waste of an interview; Philip was negative. So negative.”

A third added: “Shame This Morning (Phil) turned it into actually a really negative interview. Sam did really well to answer positively.”

Meanwhile, others agreed with Phil as one tweeted: “Too right Phil, we will never win Eurovision because frankly they don’t like us!”

Will you be watching the Eurovision 2022? Head to our Facebook page @EntertainmentDailyFix and tell us.