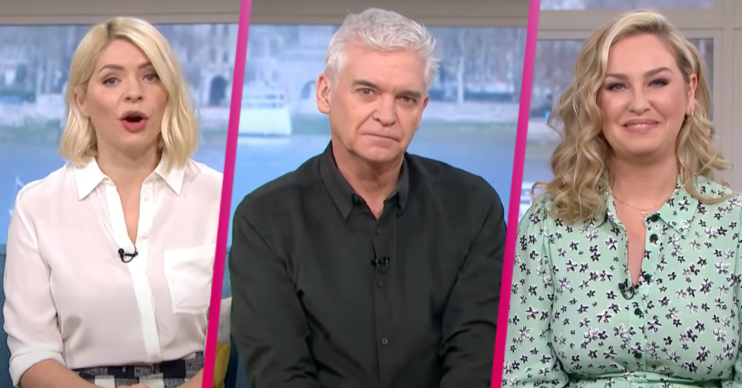 Josie won't be on the show tomorrow

This Morning host Holly Willoughby is currently off sick from the ITV daytime show.

She’s been struck down with COVID-19 and is currently isolating at home.

As a result, Josie Gibson has been filling in alongside Phillip Schofield on This Morning.

However, in another presenting shake-up, Josie revealed that she won’t be hosting the show tomorrow (March 17).

Who is hosting This Morning while Holly Willoughby is sick?

Josie has been by Phil’s side this week, hosting This Morning in Holly’s absence.

She’s gone down a storm with viewers, but there is bad news for those hoping she’d be hosting the show for the entire week.

Read more: This Morning host Josie Gibson fights back tears as she speaks about death of four friends

Wrapping up today’s show (March 16), Josie revealed that she wouldn’t be on the sofa with Phil tomorrow.

Instead, she’ll be presenting segments from the Cheltenham Festival for the show and Alison Hammond will take her place in the studio.

Josie admitted: “I’m so lucky because I’m off to Cheltenham races tomorrow and my good pal Alison will be here to keep you company, Phil.”

He then told Josie: “Thank you for this week.”

Of course, Alison hosts the show with Dermot O’Leary on Fridays, so she’ll be hosting two days in a row.

How did viewers react to the presenting shake-up?

Viewers love Josie, with some admitting they prefer her to both Holly and Alison.

“I love Holly to bits bit have to admit this has been better with Josie presenting,” said one fan of the show.

A third commented: “@thismorning is so much nicer with #Josie presenting. She’s fun, but not overpowering like Alison. She is genuine and needs to be on the show more.”

“Josie’s 100% the best person to replace Holly in my opinion!” declared another.

How is Holly feeling?

She’s also missed her hosting duties on This Morning this week.

But friend and co-host Phil did give an update on how she’s doing at the start of the show today.

He said: “She is still taking care of herself, looking after herself.”