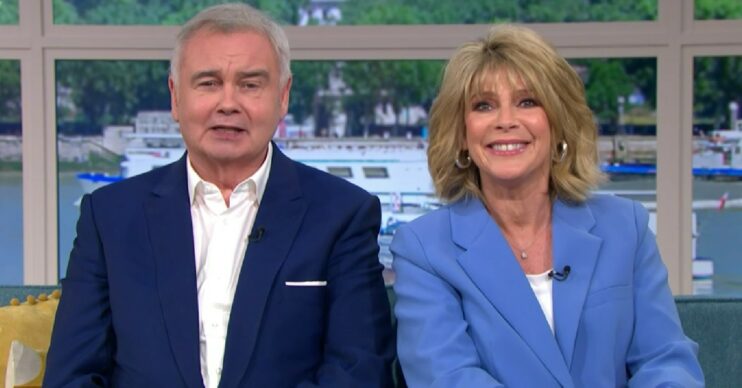 This Morning: Eamonn Holmes and Ruth Langsford fans threaten to ‘switch off’ after departure

The pair have entertained viewers for the past seven weeks

This Morning fans have threatened to boycott the show, as Ruth Langsford and Eamonn Holmes waved goodbye for the summer.

The married pair took over from Holly Willoughby and Phillip Schofield on the ITV programme.

However, viewers were left devastated as Ruth and Eamonn hosted their final show today (August 27).

Eamonn Holmes and Ruth Langsford host their final This Morning

The couple ended today’s show as they showed their best moments from the past seven weeks.

The montage included clips of Ruth cracking up with laughter.

Following the video, Ruth said: “Thank you very much for your company this summer and your very lovely comments.”

Meanwhile, Eamonn went on to thank the team at This Morning.

He added: “Seven weeks and it’s just gone like that.”

Despite the cheery end to the programme, viewers were heartbroken over their departure.

I DON'T WANT RUTH AND EAMONN TO GO 😭😢#ThisMorning

It is very sad, that today is Eamonn and Ruth’s last day. I don’t mind Phillip and Holly, but the thought of Alison and Dermot return on a Friday doesn’t please me!!! in fact I think I’ll give Fridays a miss from now on!! #EamonnRuthWillMissYou #ThisMorning

I wish @EamonnHolmes & @RuthieeL were on #ThisMorning every day, they are the best 😁 make me smile, laugh and feel good every time ❤️ xx#EamonnAndRuthForever #BestPresenters #Banter #Laughs

On Twitter, one said: “Absolutely heartbroken that there is no @EamonnHolmes and @RuthieeL #ThisMorning.”

Another added: “Thank you @RuthieeL and @EamonnHolmes for summer. I have enjoyed all the banter, fashion, cookery, laughter and wit from you both.”

A third tweeted: “@EamonnHolmes and @RuthieeL the best morning host ever. Will miss your honest and truthful comments and all the giggles. They should keep you on all year!”

A fourth shared: “Fabulous 7 weeks with Eamonn and Ruth. Proper presenting and great interviewing skills whilst making us viewers laugh. Grant us all an early xmas wish & leave them on PERMANENTLY.”

They should keep you on all year!

Meanwhile, others threatened to boycott the show completely.

They tweeted: “Incredibly short sighted and stupid of ITV to get rid of Eamonn and Ruth. I’m afraid I won’t be watching now, the pair had me hooked over the summer weeks.”

A second agreed: “My telly will certainly be off when Holly & Phil come back next week #ThisMorning.”

Another raged: “Well that’s me turning off until you’re back @EamonnHolmes & @RuthieeL. Insane, do the producers never actually watch their own shows?”

Who is hosting This Morning next week?

Alison Hammond and Rochelle Humes will appear on the show on Monday (August 30).

Eamonn and Ruth announced the news as they signed off Friday’s show.

Meanwhile, on Tuesday, Rochelle will be joined by Vernon Kay.

Read more: Eamonn Holmes responds to fan who urges he and Ruth to host GMB

Vernon, who came third on last year’s I’m A Celebrity, recently indicated the role is a dream job for him.

The presenter said: “This Morning is the daytime go-to show. So to be asked to guest host on a show I’ve watched since its inception is a huge tick for me.

“I’m really looking forward to working with Rochelle and sitting on that famous sofa.”