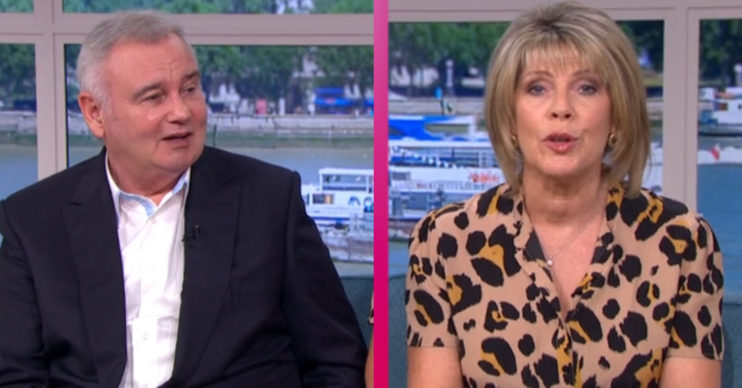 Ruth Langsford jokes Eamonn Holmes is ‘drunk’ on This Morning

Ruth and Eamonn got a little merry on Tuesday's This Morning

Eamonn Holmes was told off by wife Ruth Langsford for being ‘drunk’ on This Morning.

The presenting couple enjoyed sampling cocktails on Tuesday’s show – but Ruth fretted that Eamonn had enjoyed perhaps one too many.

Eamonn and Ruth enjoyed kombucha infused cocktails but she accused him of drinking too many during a commercial break.

As they returned she said: “You look drunk. How much have that have you had?”

He then hit back at social media reactions who claimed he was tipsy.

“I’m just relaxed and people think I’m an alcoholic, drinking at 11am in the morning.”

Ruth quipped: “I was just thinking it’s a little early and the vodka was quite strong in that.”

Meanwhile, Eamonn mocked Ruth for appearing to get the day wrong.

She said: “Fun Friday!” as she clinked martini glasses with Eamonn.

He snapped back: “It’s only Tuesday, what are you talking about?”

She replied: “I meant imagine if this was a Friday evening…”

However, as the cocktails set in he perked up and did a little dance for his first dancing Instagram video.

I was just thinking it’s a little early and the vodka was quite strong in that.

The couple’s banter extends to their home life as well.

The pair regularly update their social media followers on their everyday shenanigans.

Over the weekend a dismayed Eamonn took to Twitter to say he’s been banned by Ruth from using their BBQ.

He said: “Am I the only man in the Country whose wife tells he is not allowed anywhere near the BBQ even though I bbq superbly well?

“I have been threatened & warned off by @RuthieeL.”