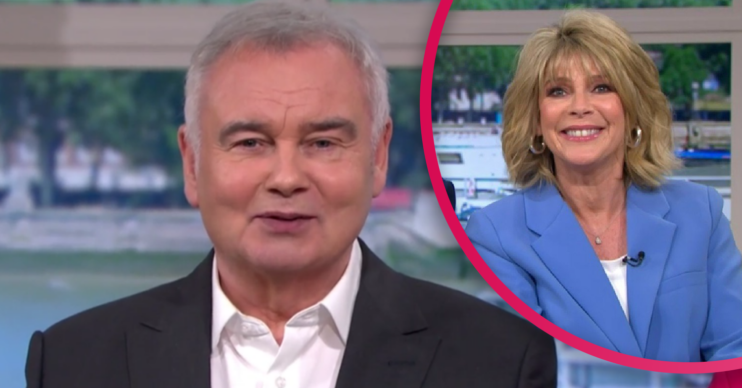 The couple have been together for more than 20 years

Eamonn Holmes and Ruth Langsford have one of the sweetest marriages in showbiz, but he’s joked he goes to work for a break from their bedroom antics.

The couple have been married since June 2010 after getting together in 1997.

And, it seems, their sex life just keeps on getting better and better – to the extent that Eamonn has previously admitted he is “run ragged” by his wife.

Eamonn – who is fronting This Morning alongside Rochelle Humes today (August 30) – has previously opened up about their love life.

He said: “I love Ruth deeply but also I fancy her.

“How could I resist? No wonder I look tired all the time – that woman has me run ragged.

He added that people ask him why he works “so much”.

What has Ruth said about their sex life?

Ruth has also spoken about their love life – and admitted it’s just got better the longer they’ve been together.

“It’s fantastic, of course – he’s married to me,” she quipped.

Read more: This Morning fans threaten to ‘switch off’ over Eamonn and Ruth’s departure

“It gets better when you get older because you know what you are doing.”

Eamonn has also admitted that he hasn’t given up on romance, just because the pair have been together for more than 20 years.

He previously admitted: “She doesn’t like going out but she would complain if I didn’t do anything for her.

“I’m wasted on that woman, I put rose petals in the bath for her. I’m a romantic – she’s very lucky.

“What’s the point of being in a relationship if you are not romantic? You’ve got to be be romantic,” he said.

Why is Eamonn on This Morning today?

Vernon Kay was supposed to be hosting This Morning today, but had to pull out at the last minute after contracting COVID-19.

Eamonn stepped up to host This Morning alongside Rochelle Humes at the last minute.

So what do you think of Eamonn’s revelations? Tell us on our Facebook page @EntertainmentDailyFix.