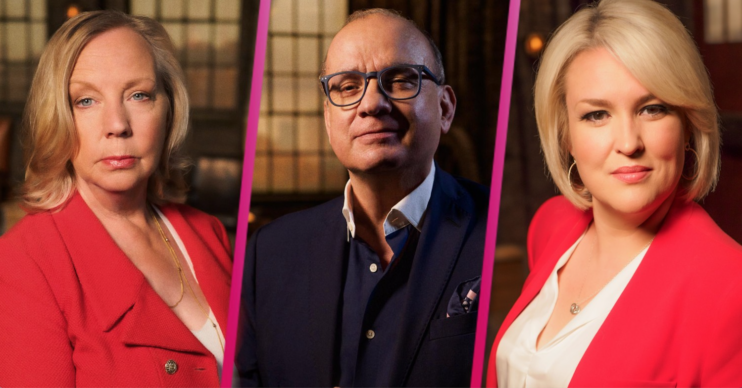 Dragons’ Den behind the scenes: where is it filmed and is it all real or is some of it scripted?

Is all as it seems?

Dragons’ Den is one of the slickest shows on TV, but – so many questions – is it all real or is some of it scripted and, actually, where is it filmed?

This is what many fans search for each week when the show is on. So we’re taking a peek behind the scenes to see what really happens when the cameras aren’t rolling.

Dragon’s Den behind the scenes: Is it all scripted, is it real?

It’s the number one question that’s asked by fans of the show.

In 2018, brothers Alexandra and Rupesh Thomas appeared on the show asking for investment in their drinks business – Tuk Tuk Chai.

They ended up accepting then turning down a £100,000 offer from Peter Jones, but afterwards were asked about whether the show was scripted on their website.

“We had prepared our own pitch and were not told what to say, despite people thinking the show is fake.

“We researched previous episodes to get an idea of what questions the Dragons might ask. There were not really any unexpected questions… ”

Dragon’s Den behind the scenes: Where is it filmed?

Originally filmed in a furniture depository in Stoke Newington in north London, the show was on the move after the first series.

Production was forced to move because of building work next door.

Thanks to more building work, the show shifted to a set at Pinewood Studios, but by series 10 everything had moved again to Salford Quays in Manchester.

The show then moved to Space Studios in the city, where it found a home for two years between 2015 and 2017.

But then it moved again, this time across the city to Old Granada Studios.

And that’s where it’s still filmed to this day.

“The re-invention of this famous building will create a place where people come together to work, stay and play. It will be a new cultural destination for the city.”

And, last year, the BBC announced that the production team will be moving up to Glasgow’s Pacific Quay, although no decision has yet been made about filming there in future.

One surprising thing that isn’t real… the stairs

One little story from the early days was relayed by Glen from EcoSense, who appeared on the show almost a decade ago.

Appearing on the FrequencyCast in 2013, he revealed something unusual about… the stairs in the old studio.

“Probably one of the most bizarre things about it, which not a lot of people know, is you know obviously you’ve got a set of stairs that you come up to into the Den – those stairs don’t exist,” he said.

“In the actual Den where the Dragons are, there’s about three steps.

“You have to pretend that you’re walking up steps to get in there.

“The whole set of stairs themselves are actually in a completely separate studio, which is quite bizarre.”

Ah, the magic of TV!

Do the entrepreneurs see the den beforehand?

He told Next Level Business that a car came to pick them up at 6.30am and they didn’t get to film until 3.30pm.

“We’d been practising in our bedrooms the night before… but around 15 minutes before we were going on, they said, ‘right, you’re going on’. Our mouths went dry.”

Cecily Mills, meanwhile, also appeared on the show in 2019 to ask for investment in her vegan ice cream brand.

She told the Express: “You’re not told what order you will go into see the Dragons, they don’t decide that I think until the actual day.”

Elsewhere, Edward Hancock – founder of Cheesegeek – told The Sun it’s a shock to the system!

“There are no advisers on hand to answer any questions or to give you advice in terms of your pitch,” he said.

“What makes the show so great is that it’s completely real.

“The first time you see the Dragons is walking out of the lift – it’s just like how viewers see it when watching from home.”

Dragons’ Den behind the scenes: How are entrepreneurs selected?

Budding entrepreneurs can apply to be on the show.

Cecily Mills in her interview with the Express said that the whole process of application can take several months.

“So it starts with an application, which is quite long, and if you get through that application you have a video interview,” she explained.

“If you get through that, you are taken through months worth of due diligence, where the researchers check everything, every single claim you make is checked and double-checked and triple-checked.”

While entrepreneurs can apply to appear on the show, producers have been known to approach businesses themselves and invite them to apply.

They use criteria like strength of idea, a robust business plan and projected turnover to help.

Do the Dragons know the pitches beforehand?

What about the Dragons? Do they know what to expect?

In 2019, Sara Davies spoke to the Metro newspaper about behind-the-scenes secrets.

“What a lot of people don’t realise is that we genuinely do not know anything about the product, the entrepreneur or anything before they walk through the doors,” she said.

She revealed that each product is already set up when they walk in the room, but production staff cover it all up with a black screen so they can’t see it.

As soon as the entrepreneurs walk out of the lift, she said, the screen is lifted and the Dragons see the product for the first time.

“I hadn’t appreciated how real-life it was. It’s very much our own money we’re spending too, and it’s not insignificant sums of money.”

Do the Dragons use their own money?

The BBC says: “Each Dragon is working as an individual investor. The Dragons can invest as little or as much of their own money as they want.

“… and relies on the integrity of both investor and entrepreneur to freely enter the transaction and be fully committed to seeing it through.

“However, the deal is solely between the Dragon and the entrepreneur…

“… and after additional meetings, if an agreement cannot be reached, neither party is legally obliged to complete the deal.

“The BBC remains impartial, as they cannot be involved in the business contract between the two sides.”

How long does each episode take to film?

Here are the brothers Thomas from Tuk Tuk Chai again.

“We arrived at the studio around 7 am for all the preparations with the production team.

“There was a lot of waiting around, even though we were lucky enough to be the first to enter the den on that day.

“Although our part of the episode is less than 15 minutes, the actual pitch to the dragons took just under two hours!”

And the Dragons work hard.

Filming takes place for 20 days straight, no let up.

Sara Davies, from her interview with Metro, said that the whole process is like a “game of poker” and each pitch can take up to two hours.

They see six entrepreneurs a day, she said.

Big business is hard work for the likes of Peter Jones, Deborah Meaden and co!