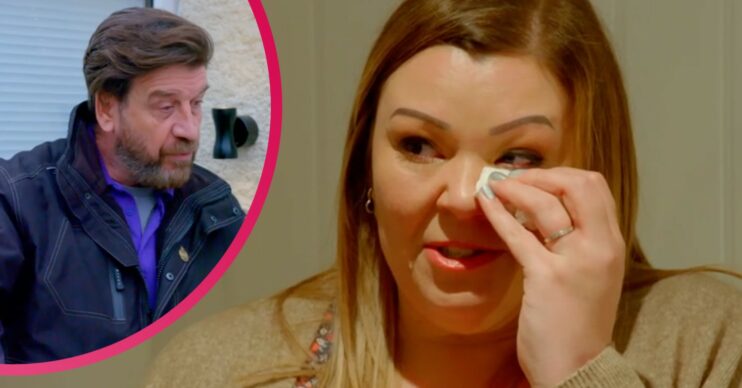 A real tear-jerker of an episode

DIY SOS viewers were left in floods of tears last night (May 10) as Nick Knowles helped a grieving family.

The BBC One show featured widow Lindsey McAuley and her family from Kettering.

Their home had no power, running water or kitchen and their back garden was a building yard after the sad loss of Lindsey’s husband Shaun.

But local volunteers, Nick, Gabrielle Blackman and the team all stepped in to assist, leading to one of the most emotional shows ever in the series.

Midwife Lindsey McAuley lost her husband just six weeks after he was diagnosed with an aggressive cancer last year.

Ex-soldier Shaun and Lindsey, a mum-of-four, shared two young sons together. They all lived in a two-bedroom house with plans to extend – and Shaun working on the interior to save money.

“Once he started a project he was brilliant with it. He couldn’t wait to get started,” Lindsey recalled.

However, delays arose due to the coronavirus pandemic. And it wasn’t long after building work began – with the family living at Lindsey’s parents’ house – that Shaun fell ill with a urine infection. D

octors also found a mass in his lower back.

Within days Shaun’s pain became more severe and he was hospitalised.

Read more: DIY SOS: The Big Build – how many episodes are there and is Nick Knowles back for good?

Lindsey explained: “A couple of weeks after that we found out it was a really rare cancer. It was just a massive shock, he was so well and fit and healthy someone who had never been ill before ever.”

‘Sorry I’m leaving you with such a mess’

A tumour was removed, along with a kidney and a large part of Shaun’s bowel. This meant he had to use a stoma.

Sadly, within weeks, it was confirmed the cancer had spread to Shaun’s lungs and liver. It was hoped that chemotherapy might give him another 18 months to live.

However, a blockage in Shaun’s stoma lead to a delay in treatment. And Shaun’s cancer spread so rapidly he passed away two days later.

Lindsay reflected emotionally: “One of the last things he said was: ‘Sorry I’m leaving you with such a mess.’ He became unwell at the end of September and he died on the 10th of November.”

With Lindsey and her four children unable to live in the property, they spent five months with her parents.

But the DIY SOS team transformed the shell of a house into a home in just a week – leaving Lindsey and her family overwhelmed and viewers sobbing at the heartwarming efforts.

Many of those watching at home noted how affected they were by Lindsey’s moving story.

“Definitely in tears at that one. Fabulous work by the whole team,” one viewer congratulated the show.

“Amazing work, not usually a watcher but I’ve been in floods of tears, such a great thing to do. Restores a bit of faith in humanity,” added someone else.

Another touched viewer said they had cried “buckets”.

“There are some fabulous people in this world. I hope their days got a little brighter,” they continued.

Meanwhile, host Nick also reflected on the episode on Twitter.

He wrote: “Was a pretty emotional show last night wasn’t it? And funny, and reassuring I think.

“We need to see what people can do when we work together now more than ever.

“Too much division, polarity, mud slinging and being judgemental.

“Every build brings over 300 strangers together.”

DIY SOS next airs on BBC One on Tuesday May 17 at 8pm.