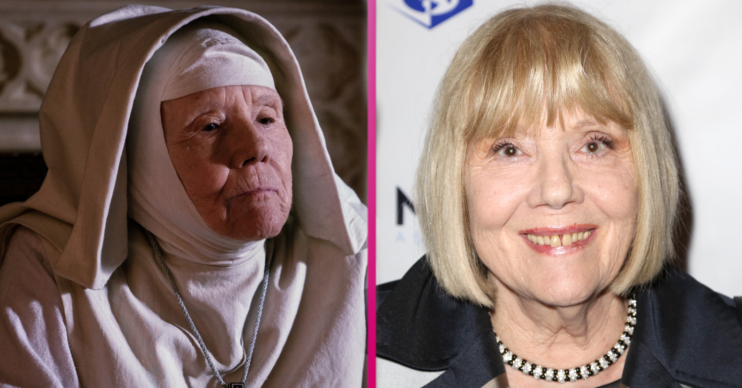 While the three-part tale of sexually-repressed nuns in a remote Indian convent added intrigue to the schedules, it was Diana’s appearance that really got people talking.

So, was Black Narcissus Diana’s final role, and how did she become a household name?

Black Narcissus was not Diana’s final role, although it was her last appearance in a television drama.

However, before her illness, she had filmed several roles, including that of Sister Ruth for Black Narcissus.

The three-parter may mark her final appearance on TV, but we have one movie left to enjoy her in.

How did Diana Rigg become famous?

Already an acclaimed theatre actress, Diana became a household name in the 1960s when she starred as the iconic Emma Peel in TV series The Avengers.

Daring catsuits, mini-skirts and knee-high boots made Diana into a reluctant pin-up and a symbol for Swinging Sixties London.

In 1968 she played James Bond’s wife, Tracy, in the movie On Her Majesty’s Secret Service, alongside George Lazenby.

Roles in Doctor Who and Bleak House followed, and she won a BAFTA in 1989 for her role as an obsessive mother in Mother Love.

However, younger viewers will remember her as Margaery Tyrell in Game Of Thrones.

How did viewers react to Diana’s appearance in Black Narcissus?

After Diana’s appearance in Black Narcissus, fans paid tribute to her on social media.

Diana Rigg was impeccable. What a talent. #BlackNarcissus

Diana Rigg was an amazing actress #BlackNarcissus her final role

Watching #BlackNarcissus and it’s soo good to see #DianaRigg back on our screens. Truly one of the greats. 😇 👼

Diana Rigg’s last role. What an impact. What a legacy. #BlackNarcissus pic.twitter.com/BLphdvRmlo

One viewer said: “Diana Rigg was impeccable. What a talent.”

Another wrote: “Watching #BlackNarcissus and it’s soo good to see #DianaRigg back on our screens. Truly one of the greats.”

A third commented: “Diana Rigg’s last role. What an impact. What a legacy. #BlackNarcissus”.

Was Diana Rigg married and who is her daughter?

Diana had a colourful love life.

In the 1960s she lived with director Philip Saville for eight years.

She later married Israeli painter Menachem Gueffen and then, in 1982, producer Archibald Stirling.

Before they divorced in 1990, they had a daughter.

Rachael Stirling – now 43 – is an established actress in her own right, and has starred in Women In Love, The Bletchley Circle and, this year, BBC One’s Life.