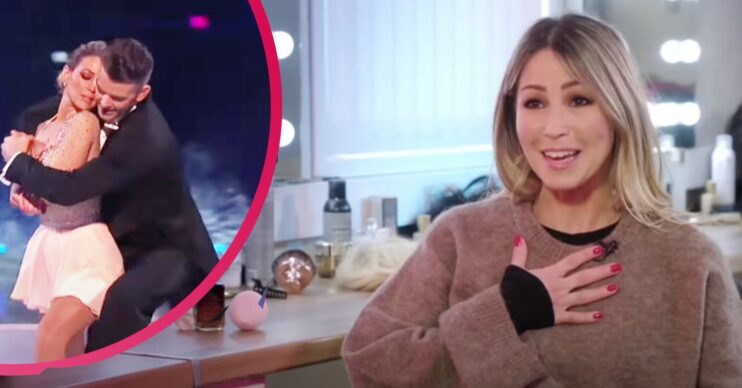 This was not a popular decision

Pop princess Rachel Stevens was the third celebrity voted off Dancing On Ice last night (Sunday 6 February) – much to the dismay of viewers at home.

Rachel was in the bottom two for the second week in a row, along with Kye Whyte.

But it was former S Club 7 star Rachel who was sent home.

All four judges opted to save Olympic BMX-er Kye, saying it was a tough choice, but he was the stronger skater.

Viewers were left feeling furious that Rachel is gone while Happy Mondays’ star Bez remains in the competition.

Some have even called the show a “fix” while others have declared they will now be boycotting it.

How did Dancing On Ice viewers react to Rachel Stevens’ exit?

“How weird are the public that they would rather watch someone who can barely skate, let alone dance (Bez) than the beautiful graceful Rachel Stevens?” raged one disgruntled viewer.

“Why is Bez still skating. He should have gone gone ages ago. He’s crap. Looks to me it’s a fix,” slammed another.

“How the hell does Bez get through ? It’s a skate competition.  He nowhere near the level of Rachel Stevens, Kye or even Sally!” agreed another.

Someone else added: “Rachel Stevens you were great tonight on the ice I wish you stayed tonight you’ll be missed sweet lady.”

“FEWWWMINNNN !! DIDN’T EVEN GET A WEEK where the icon herself Rachel Stevens skated to Sweet Dreams my LA EX !” agreed another fan of the singer.

Another cheeky viewer offered his support to Rach: “I would just like to point out that if Rachel Stevens is feeling lonely and rejected right now, I am available for home visits.”

How weird are the public that they would rather watch someone who can barely skate, let alone dance (Bez) than the beautiful graceful Rachel Stevens? #dancingonice

Rachel Stevens you were great tonight on the ice I wish you stayed tonight you’ll be missed sweet lady. #DancingOnIce

DIDN’T EVEN GET A WEEK where the icon herself Rachel Stevens skated to Sweet Dreams my LA EX !#dancingonice

Did the right person actually go, though?

Not everyone thought that the judges sent the wrong person home though, with many pointing out that Rachel hadn’t let go of her partner.

“Everyone kicking off about Bez being kept in again! He’s improving though, he also skated on his own which Rachel Stevens didn’t do last week or this week! It’s not his fault there’s so many established good dancers this year. I like seeing someone trying & learning,” said one.

“Rachel Stevens looks like she didn’t even want to be there!” someone else wrwroteites.

Read more: Dancing On Ice viewers all have the same complaint about Holly Willoughby’s appearance

Tweet of the night comes from this guy though, whose wife clearly has the patience of a saint: “When I first met my wife I told her I would leave her for Rachel Stevens.

“Just walked in on her watching Dancing on Ice with Rachel Stevens on and told her the same thing. I still don’t think she feels threatened.”

Elsewhere Philip Schofield was replaced by Stephen Mulhern as he is still testing positive for Covid-19.

Do you think the judges made the right choice? Leave us a comment on our Facebook page @EntertainmentDailyFix and let us know.