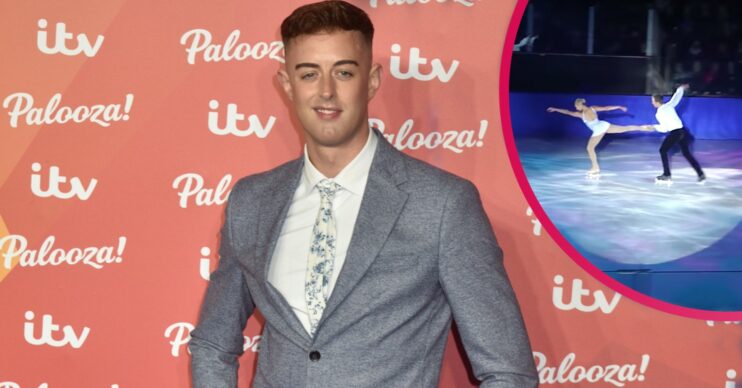 Dancing On Ice professionals: Who is Colin Grafton and why doesn’t he have a celebrity partner?

He's the new kid in town!

Colin Grafton is the newest member of the Dancing On Ice family, joining as one of the professionals for 2022.

The ice skating competitor has won many awards – but it looks like he’ll be leaving his first season on the ITV show without a trophy.

Well, read on and we’ll tell you everything we know about the skating superstar Colin Grafton…

Dancing on Ice professionals: Who is Colin Grafton?

Colin Grafton is a US pairs skater who started competing when he was seven years old after being inspired by the 1998 Winter Olympics.

Now Colin has joined Dancing On Ice as one of the newest professional skaters this series.

Read more: Strictly’s Oti Mabuse to replace John Barrowman on Dancing On Ice after signing up as judge

He wrote: “I am beyond excited and privileged to announce I’ll be joining the cast of Dancing On Ice on @itv!”

He continued to say: “I will have the pleasure of working with an amazing cast of skaters, crew and group of fantastic celebrities!”

However, he hasn’t revealed who he’s been paired with… and there’s a reason for that.

Who is Colin skating with on Dancing on Ice 2022?

Colin doesn’t have a celebrity partner on the 2022 series of Dancing on Ice.

There are more pro skaters than celebrities, just like in Strictly Come Dancing.

As a result, Colin will take part in group numbers, and he’ll also be on standby just in case any of the male pro skaters can’t compete for any reason.

However, with his abs of steel (check out his Insta grid) we’re sure he’ll catch the eye of the British viewing public – and bosses will surely give him a partner in 2023!

How is he famous?

Colin Grafton is a US junior bronze medalist with his skating partner Kylie Durate.

The duo had been competing as pairs skaters since 2009.

However, they decided to call it quits and announced the end of their partnership in October 2012.

Read more: Gemma Collins looks amazing as she returns to the ice in skin tight jeans

Colin has also performed all around the world in some of the most prestigious and and glamorous sport shows.

He even got to be a part of Holiday On Ice – one of Europe’s biggest ice skating shows.

Does Colin Grafton have a partner?

As far as we know, Colin is single.

The skating sensation has kept most of his private life to himself and hasn’t revealed any current relationships to the public.

He doesn’t, however, keep his ripped physique to himself, as a scroll through his socials will tell you.

Colin’s seen topless on yachts, in the pool and posing casually in his bedroom.

You can thank us later!