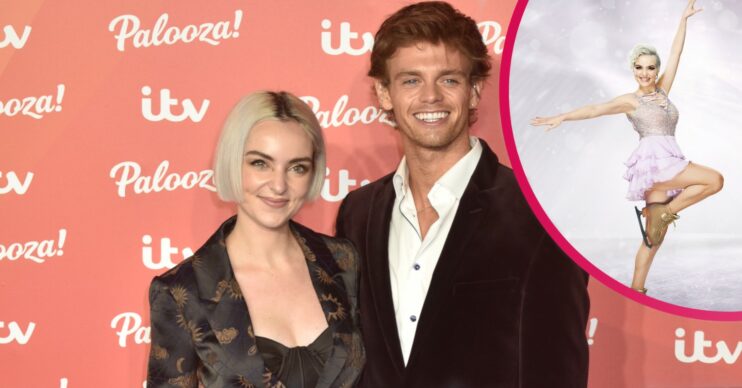 Dancing On Ice star Karina Manta is back for another series of dancing on ice, joining the professionals line up after being Graham Bell’s temporary partner last year.

The star has returned this year with an eagerness to win, but who is paired she?

Here’s everything we know about the ice skating legend.

Dancing on Ice professionals: Who is Karina Manta?

Karina is a professional ice skater from the US.

The talented figure skater began competing in 2013 with her partner Joe Johnson.

The pair have competed in huge national competitions including Skate America, The US International Classic and US National Championships.

The first skater to compete in LGBTQ duo

In 2018, Karina created a touching video and revealed to the world that she was bisexual.

In the clip, Karina said: “From now on, I’ll walk into every room smiling, parting the crowd, making my way through.”

This meant that they made history when they competed as figure skating’s first openly LGBTQ team in 2019 at the US Figure Skating Championships.

Karina also wrote a book about her experience and titled it On Top Of Glass: My Stories as a Queer Girl in Figure Skating.

Who is she partnered with on Dancing On Ice?

She shared the news on her Instagram and captioned the post: “It’s finally time for my Dancing On Ice partner reveal. I had the best day with @regangascoigne!

“I’m so excited to get started with training and hopefully put together some exciting routines for you all.”

Reagan is clearly excited to get on the ice and make his family proud.

When asked what the biggest appeal about joining the show is, Regan replied: “It’s the fact that it’s a different skill but it’s still dancing.

“So, obviously, I love dance but it’s the aspect of the skill of it. And I’ve always wanted to do it.”

During Karina’s video where she came out as bisexual, Karina also revealed that she has a girlfriend.

Her name is Aleena and they were dating for over a year before she came out.

In the clip she praised her partner for supporting her and for “waiting through every conversation that I’ve referred to you as my best friend”.