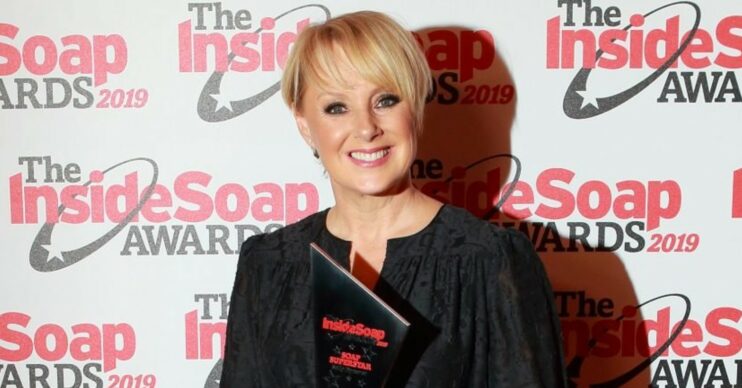 The iconic ITV soap star is thought to already be training

The Sally Metcalfe actress is believed to already be hard at work training for the show, which isn’t due to start until early next year.

In fact, Sally has reportedly been spotted at ice rinks multiple times.

According to a TV insider, Sally has dreamed of taking part in the show for years but her hectic work schedule made it impossible.

Sally Dynevor for Dancing on Ice 2022?

A TV insider told The Sun: “ITV have been keen to get Sally on the ice for a number of years and she has tried out in the past, but they haven’t been able to make it work.

“She’s finally ready to do it now though and is already taking it very seriously and has been hitting the ice rink most Sundays.

“Sally is one of Corrie’s best-loved stars, her daughter Phoebe is also now a household name so the timing couldn’t be better.”

Sally won’t be the first Corrie star to give Dancing On Ice a try.

She will be following in the footsteps of actors and actresses including Faye Brookes, Samia Longchambon and Lisa George.

A spokesperson for Dancing On Ice refused to comment on the speculation regarding Sally’s rumoured casting.

“We won’t be commenting on speculation and will be announcing our lineup in due course,” said the show.

Meanwhile, fans are still desperate to know if judge John Barrowman will be returning to the new series.

John came under fire in April amid claims of his alleged “inappropriate behaviour” on TV sets.

The Doctor Who actor later apologised for his “tomfoolery”.

As a result of the reports, claims emerged that John had been fired from Dancing On Ice.

However, a spokesperson for ITV refuted the rumours and said that a decision had yet to be made.

“Any discussions regarding the 2022 series of Dancing On Ice are very premature,” said show bosses.

What do you think of Sally being on the show? Head to our Facebook page @EntertainmentDailyFix and tell us.