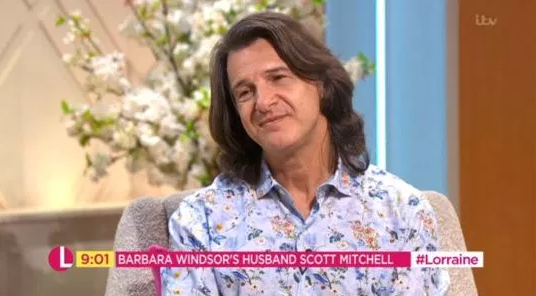 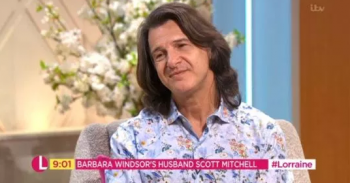 He joined Lorraine for a post-Marathon interview

Dame Barbara Windsor is becoming more scared as the effects of her Alzheimer’s get worse, her husband has said.

Scott Mitchell, who ran the London Marathon on Sunday to raise money for Alzheimer’s charities, said the actress has “good days and bad days”, and that she generally becomes more confused in the evening.

He told ITV’s Lorraine: “Come around five o’clock onward, the confusion and disorientation will set in a lot more, and last night was not a good night.

“She was very confused and she said something – and I think this is important to say, for other people – she suddenly looked at me and said ‘I’m scared, Scott.’

“She said, ‘I’m scared, because this is getting worse’, and we have to remember that, at that point, they are scared.

They are terrified, because they know that something’s OK because there’s this, at the moment, familiar person, which is me.

“But I can see her looking around the house and not placing where she is or asking me ‘Are we going to stay here? Have I got clothes here?”

“And there’s not a lot you can really do apart from be there and just calmly try and talk her round.”

Read More: Jake Wood says he was thinking of Barbara Windsor “all the way” while running the London Marathon

Dame Barbara, 81, who became a household name in Carry On films and playing pub landlady Peggy Mitchell in EastEnders, was diagnosed with Alzheimer’s disease in 2014.

Mr Mitchell, who married the screen star in 2000, was joined by stars from the popular BBC soap, including Jake Wood (Max Branning) and Natalie Cassidy (Sonia Fowler) for the London Marathon in a team called Barbara’s Revolutionaries.

They have so far raised more than £140,000 for the Dementia Revolution, a partnership between the Alzheimer’s Society and Alzheimer’s Research UK.

Mr Mitchell, who turned 56 on the day of the race, said Dame Barbara was not able to meet him at the finish line because it would have been a difficult atmosphere for her.

He said: “I had a meeting with the marathon people and they were lovely, they were going to try to do as much as they could to make it happen, and she would obviously have had people with her.

“But it’s so vast, it’s so fast and it’s so noisy, and I just know she would have, at some point, got confused or forgotten why she was there, or looked and thought, ‘Where’s Scott? Why isn’t he here?’

“The main thing I have to think of is her well-being and keeping her safe and protected from those moments.”

Read More: Scott Mitchell vows to keep Barbara Windsor “safe and loved” as long as he can

Mr Mitchell said he phoned his wife after he had completed the race, and that she said: “That’s wonderful darling – when will you be home?”

He added that, when he did return home, Dame Barbara “had tears in her eyes and she came and gave me a hug and she said, ‘I’m so proud of you, darling.’

“So she really did take it in, and I showed her the medal and she couldn’t believe it.”