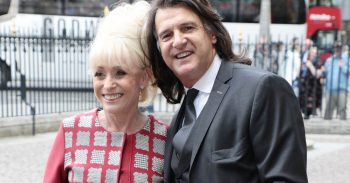 The marathon will take place this weekend

Barbara Windsor’s husband Scott Mitchell has said she isn’t well enough to watch him cross the finish line at the London Marathon.

The actress was diagnosed with Alzheimer’s in 2014 but she and Scott only revealed the news to the public last year.

Scott will be joining some of Barbara’s former EastEnders’ co-stars in running the London Marathon in support of Alzheimer’s research this weekend.

He said: “At the beginning I was really hoping that [she’d be there], but after some meetings with various people I don’t think she can be.

“I think it’s best that she’s not there. I think it would get very overwhelming for her, everyone would want to give her a hug…I won’t be there with her.

“I think for her own well-being it would be better for her to be at home.”

Speaking about Barbara’s condition, Scott continued: “One of the things I’ve noticed is the evenings are always worse.

“I’ve become a focal point for her in the confused moments and she says ‘as long as I can see you I know something is OK’ even if she doesn’t place the house or the room.

“Sometimes you’re having a normal conversation and I’ll be laughing and then it goes out of your mind that something is wrong.”

It comes after Scott recently said they were hoping Barbara would be well enough to cheer them on on the day.

Speaking to the Daily Star in February, Scott claimed that training can be challenging and that he sometimes feels like giving up, but that the thought of his wife carries him through.

Read more: Scott Mitchell vows to keep Barbara Windsor “safe and loved” as long as he can

He said: “It is Barbara who gets me through the runs because like most people running who aren’t professionals I am doing it for a personal reason close to my heart,” he said. “It is that thought that will keep me going on the day.”