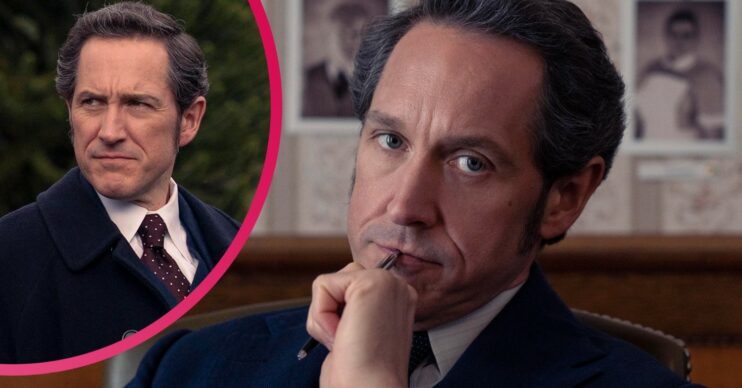 Dalgliesh on Channel 5: What happened to Adam Dalgliesh’s wife and baby?

Dalgliesh continues on Channel 5 this week, starring Bertie Carvel in the title role – but what happened to the character’s wife and baby?

The final two-parter in the latest version of the crime drama based on the novels of PD James is an adaptation of A Taste for Death.

Here’s everything you need to know about Adam Dalgliesh’s latest tale, and what happened to his wife and baby.

Dalgliesh wife and baby – what happened to the detective’s family?

The series began with Detective Chief Inspector Adam Dalgliesh in mourning for his wife and child.

By the time the character was introduced to readers in James’ first novel, Cover Her Face in 1954, Dalgliesh had already lost his family.

His wife tragically died in childbirth while giving birth to their first baby, who did not survive.

The three Channel 5 stories, in many ways, are about the first year of grief.

Read more: Bertie Carvel in Dalgliesh: How did he become famous and why did he almost turn down Doctor Foster?

In a recent interview, actor Bertie Carvel said: “My personal journey [as the inspector] is about coming to terms with – or beginning a journey – processing this loss.

“Dalgliesh is someone who deals with death and spends his time thinking about death.

“Then he loses his wife and child…”

Bertie added: “I was trying to use the investigative story to do two things.

“One tells the story of what a great detective is. How relentlessly he pursues the truth, often to the detriment of everyone around him.

“But at the same time, in every part of this investigation, there is also an inner investigation into his relationship to death and his recent loss.”

Read more: Alice Nokes in Dalgliesh: Who did she play in EastEnders and why did she leave?

Dalgliesh wife and baby – Bertie Carvel’s own experiences of loss

When viewers met Dalgliesh in episode one, he’s grieving for the loss of his wife and child a year earlier…

And actor Bertie Carvel has revealed he was grieving too.

He said: “The story I was making in Dalgliesh was about a year of grief, and it intersected with my own experience in a way that was challenging.

“My mother died in November 2019, and it’s that and the birth of my son which followed closely that are the hinges in my life.”

He added: “I won’t be the same again in my work, so that was challenging, but it was healing and therapeutic too.”

Bertie’s mother Patricia, a psychologist, died aged 80 after a stroke and complications from surgery.

Dalgliesh A Taste of Death plot

Dalgliesh’s final two-parter on Channel 5 is an adaptation of A Taste of Death.

The series, based on the novels of PD James, concludes tomorrow (Friday November 19 2021).

A Taste of Death is the seventh novel in the Adam Dalgliesh series.

DCI Dalgliesh is called after the warden of St Matthew’s Church in Paddington discovers the bodies of two men with their throats slashed in the vestry.

The men come from very different walks of life…

One is Sir Paul Berowne, a baronet and recently resigned Tory MP.

The other is a homeless man called Harry Mack.

Initially, DCI Adam Dalgliesh and his team ponder the possibility of suicide.

But this is murder. Of course it is!